Although there was plenty of eating during the Thanksgiving holiday, many Kona residents and visitors, including us, made it a point to stay active over the long weekend to help combat some of the calories.

Over 150 people started off the holiday on Thursday morning with the 5th Annual Wobble & Gobble organized by Eric Neilsen. The event offered three different distances for participants - 1 mile, 3.5 mile and 6.4 miles. The distances weren't the typical Thanksgiving 5K or 10K because the race was held on the scenic Walua Trail, a trail that tracks 3.2 miles up and 3.2 miles back down again for those doing the longest option. And when we say "up" we really mean it. We estimate the elevation change from the start to the turn-around of the 6.4 mile course to be approximately 750 feet. Definitely a good way to work up an appetite for a holiday feast!

Before starting the race, Eric made several announcements regarding the event and also awarded a couple of door prizes. Dawn Henry of Healing Island Massage had generously donated two 60-minute massage gift certificates. The certificates were passed out based on randomly selected birthdays. Luckily there was no one with a birthday on July 8, since I was actually able to win one with my July 9th birthday! I will be going for my massage this week and am really excited. Thanks again to Dawn for the donation!

The first three places in the 1-mile event went to Mark Curry in 7:02, Silias Wiley at 8:08, and Riley Pries at 8:38. The top three finishers in the 3.5 mile event were Pete Zelner in 25:56, Jenny Marine in 26:17, and Craig White in 26:18. Finally, the top three for the 6.4 mile race were Jesse Thomas in 36:05, Jason Braswell in 40:54 and Erica Braswell in 40:58. Both Jesse and Erica set course records with their times and won coffee from Kunitake Farms (special thanks to John and Marie Kunitake!) Full race results can be found at http://www.westhawaiitoday.com/articles/2009/11/27/sports/local_sports/sports08.txt.

Congratulations to all participants, including the following friends of the Big Island Running Company: Annie of the soon-to-be-opened Annie's Burgers, Jolene Meers (who completed the 6.4 mile course while pushing her son Ryan in a jogging stroller!), Ray Whitford and the Big Island Honda team, and Bill Harlan and the Teachers with Aloha! And thanks to Eric Neilsen for putting on this fun and challenging event! Now we are looking forward to the 5th Annual Jingle Bell Beach Run to be held on December 20 at Kailua Pier.

Then on Sunday, Peaman gave everyone a chance to work off those Thanksgiving feasts by hosting his Post-Pigout Peamania. 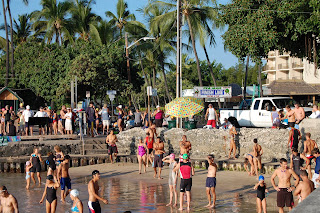 The new format for this year consisted of a 1/4 mile swim, followed by a 2 mile run, followed by another 1/4 mile swim and another 2 mile run. Of course, in true Peaman fashion the main purpose was to have fun, so any combination of those distances was allowed. Some people opted only to swim, others opted only to run as part of a relay. In addition, there was a shorter race distance for the peawees. 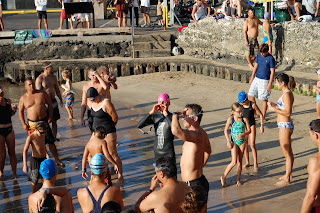 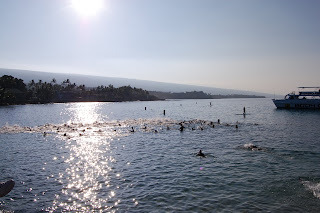 Start of the race 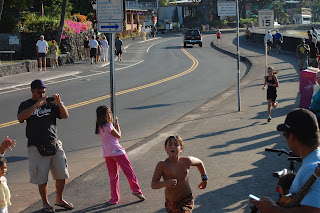 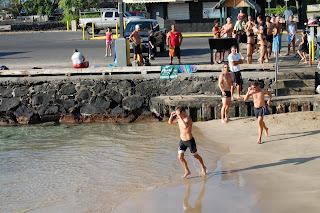 Men's leaders heading back to the water for loop 2. 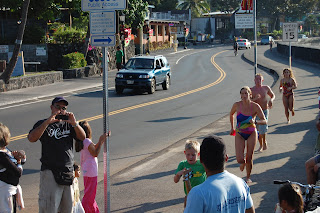 Runners coming in for part 2. 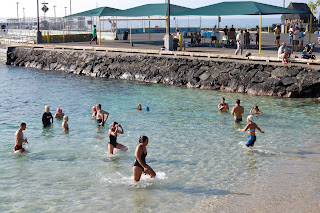 Transition to and from run and swim 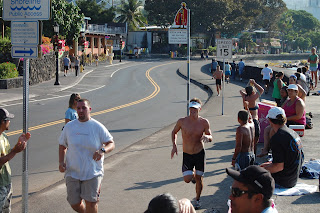 The top three peawee finishers were Bronson Leslie, Taylor Doherty and Dustin Ballesteros, while the top three adult full-course finishers were Sam Corace, Kevin Murar, and Matty Cuningham. Full results are posted at http://www.westhawaiitoday.com/articles/2009/11/30/sports/local_sports/sports03.txt. But judging from the smiles and laughter at the event, everyone was a winner!
Posted by Melissa B at 2:24 PM No comments:

More changes have been made at the Big Island Running Company! The store has a fresh coat of new paint, as well as a new color scheme. Here are some recent pictures of the store: 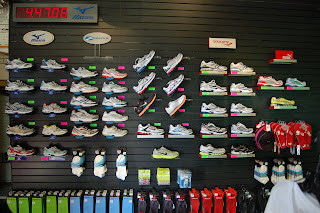 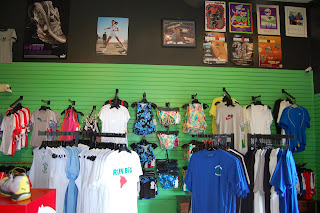 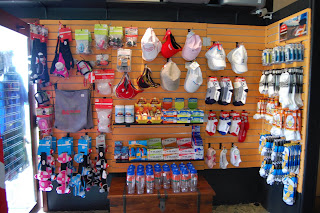 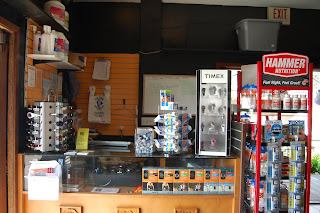 We've also received many new products in the past couple of weeks. We now carry several Nike shoe models, including the popular Lunarglide and Lunaracer models, as well as new Nike apparel. For the Ironman enthusiast, we have several different styles of Ironman hats and visors. Finally, we now carry Timex watches for men, women and children, Timex pedometers and Timex heart rate monitors.

Come check out all the exciting changes to the store!
Posted by Melissa B at 12:09 PM No comments:

Meb on The Late Show

Meb Keflezighi presents the "Top Ten Thoughts That Go Through Your Mind When Running The New York City Marathon."

10."Wow, Staten Island is even more beautiful that I imagined"
9."Cool! MapQuest found a route that's only five miles"
8."Am I experiencing a runner's high, or is it the bus fumes?"
7."Is that the finish line or crime scene tape?"
6."Why can I run 26 miles in less time than it takes to play a World Series game?"
5."Car!"
4."Cramp!"
3."Who's that little boy waving at me? Oh, it's Mayor Bloomberg"
2."I forgot to bring exact change for the Verrazano Bridge!"
1."I really hope that was Gatorade"