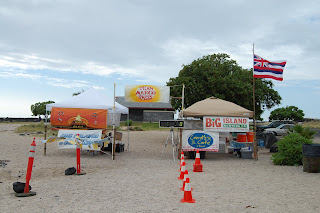 A post on the Kona Marathon will be up soon, but in the meantime, I wanted to make sure I recapped a great run put on by Carl Koomoa and Team Mango. Apparently, back in the day, there used to be an evening run on Alii Drive that occurred on the day of the Summer Solstice. However, due to the growth of Kona (i.e. more traffic) and the growth of the race, the organizers put the race on hold for several years until they could find a safer place to host it. Well, the time has come and this year Team Mango revived the Summer Solstice Run out at OTEC. These runs were at a perfect location, with a start and finish right along the beach!

They offered three different distances - a seven-mile run on the King's Trail, a four-mile run on the beach road to Pine Trees, and a 1-mile beach run. I opted to join the four-mile version, since the King's Trail run seemed a little too technical for me. But 9 hearty souls conquered the longer and harder race. Here they are at the start (and special thanks to Jano Soto for taking the photos)! 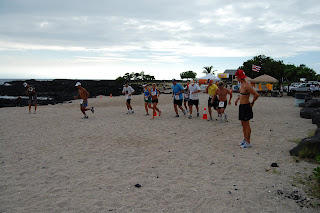 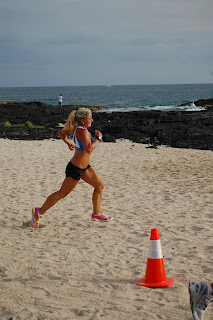 Paola Soto cruising to the finish

In the meantime, the 4-milers were sent out on our course: 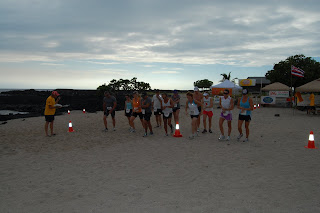 The beach road is fairly hard-packed sand in most places, but there were some deeper sandy portions and some pretty rocky areas. With the Kona half marathon only days away, there were some tense moments as I tried to make sure I didn't twist an ankle and made it to the finish line in one piece. In the four-mile run, Mike DeCarli came in first in 30:49, Danny Jesser was second in 32:47 and Harry Yoshida was third in 33:38. Kym Kiser was next and the first woman in 33:56, while I followed in 34:51. Vanessa Swanson was third in 38:13.

Finally, the keiki completed a 1-mile run on the beach, with Sienna Levine finishing first in 8:34, followed by Tanner Levine in 9:23 and Cody Evile in 10:05.

Full results from all of the races are available here. 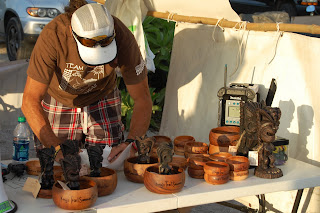 Following the race Carl (aka Gecko) passed out the awards, which were great koa bowls and tikis. Since the races were fairly small nearly everyone received an award. 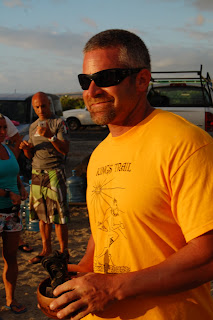 And once that was done, there were even more raffle giveaways. I came away with a bioastin bag filled with all kinds of goodies! Mike DeCarli (above) won some great Rudy Project sunglasses and someone else won a Rudy Project helmet.

All in all, this was a great event that hopefully continues and grows in the years to come. Mahalo to Gecko for putting this all together. And the night ended in the best way possible - with a Hawaiian sunset: 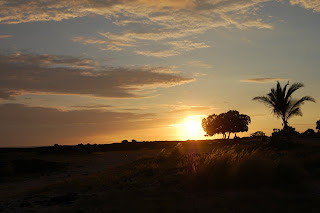 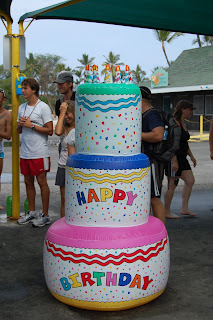 I just realized it's been three weeks since our last post. It's not that there hasn't been anything going on, but maybe too much going on! Honu has come and gone, and 24 Big Island residents were selected to participate in the Ironman World Championships in October. The first annual Ka'u Half Marathon, 10K and 5K was held on June 11, followed up by another successful Queen K Tri Club training run on June 12.

This past weekend had two options for the whole family. First on Saturday were the Keiki Fun Runs hosted by Kona Commons in connection with the Kona Marathon. As always those events were a blast to watch. Some kids are natural runners and others need some coaxing from mom and dad. Overall, it looked like all of the kids had a great experience. Results from the runs can be found here. Unfortunately, I was volunteering that day and didn't get a chance to take any photos.

Then on Sunday, everyone gathered again to celebrate Father's Day and Papa Pea's birthday with Papa Pea's Birthday Biathlon. 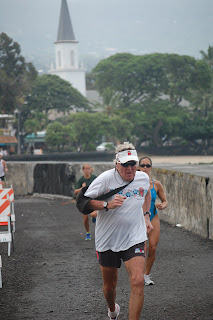 Race honoree Papa Pea sprinting to the finish (even with his injured shoulder).
The event distances were a 1/2 mile swim and 2 mile run. After doing a long(ish) run before the race, I decided just to swim while Jason tagged off me for the relay. Needless to say, I was the weak link on that relay team. But I did manage to have a pretty good swim (for me), getting under 20 minutes for the first time ever. I think the course must have been short! In any event, we managed to finish sixth in the Split Peas division in a time of 30:21. 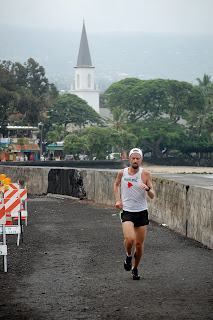 Jason in the final stretch.

Full results from all the races are here. There's been some discussion as to the results not being quite right this time around, with the first three people listed in the full race actually having completed the peawee distance, but we're not sure about that. Also, there are several entries listed as "No Name Provided." After much studying of the results, I think we've concluded that those individuals completed the run only event and therefore didn't have a relay partner. Anyway, since we're not exactly positive on what happened, we'll move right to the pictures. 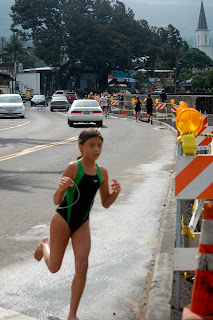 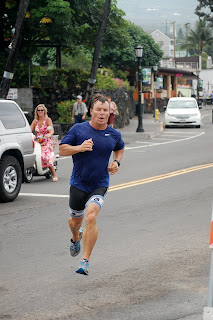 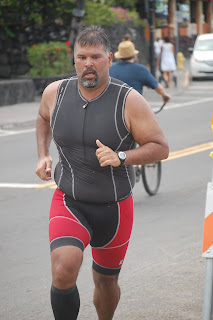 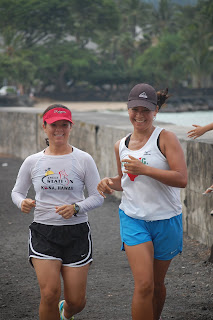 Lee-Ann and Christine having a ball. 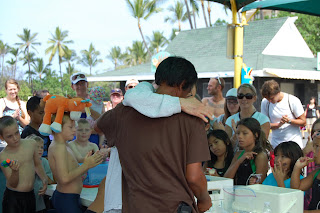 Peaman awarding pier volunteer Brian with the Perpetual Pea.
And the fun continues today with Team Mango's Summer Solstice Run at the Natural Energy Lab (OTEC) at 4:30 p.m. Then this weekend is the Kona Marathon Family Runs. We hope to see everyone out doing one of the distances!
Posted by Melissa B at 4:50 PM No comments: 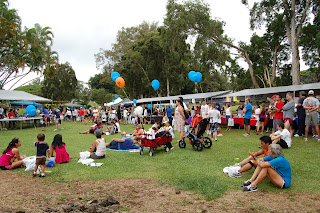 Memorial Day is a special day to honor those who have served our country and have given the ultimate sacrifice. We truly appreciate all that they do to keep us safe and free. On Sunday of Memorial Day weekend, we also honored those who serve our community by providing emergency medical services - policemen and women, firemen and women, and other emergency service personnel. The EMS Run is one of the Big Island's largest 5k runs and this weekend's was no exception. Over 700 people came out to run in the 5k or walk the 2-mile route.

One of the great things about this event is that it is truly for the whole family. In addition to the two run/walk distances, there are plenty of fun activities for the kids. This year, People's Advocacy for Trails Hawaii came over from Kona to do a bike rodeo for the kids. 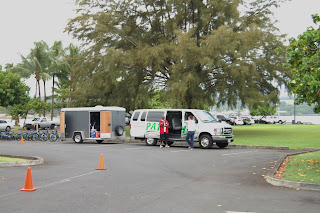 There were also bouncy houses and tours of a helicopter! Several vendors were also there to show off the different products and services they offer. 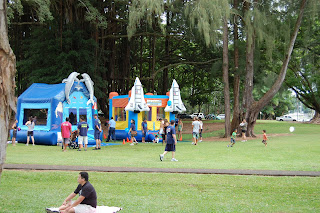 As I remembered from last year, the giveaways were also amazing. What seemed like over 200 people won door prizes donated by various local businesses, including cookies, gas cards and gift certificates. Unfortunately we didn't walk away a winner this year, but we'll be back next year for sure!

Ian Smith (19:54) and Lisa Hadway (22:27) took top honors for the public safety division, the second year in a row for both. Ian also was the top runner pushing a baby jogger! 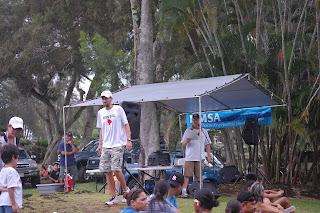 Congratulations to all participants and thanks for supporting the EMS Run!
Posted by Melissa B at 5:07 PM No comments: