I probably should have put this post up earlier this week, since there's not going to be much to it.  Last Sunday morning was the Mother's Day Peaman event - Polar Bear's Pinto Bean and Pinata Biathlon.  But this was one Peaman race where the weather just didn't want to cooperate (that's one of the reasons this post has no pictures).

About 3 minutes after the race started, the skies opened and the downpours began.  Despite huddling under an umbrella tucked up against a truck, the timing machine did NOT enjoy the rain at all.  So 6 minutes into the race, it went beserk!  One of the first rules of timing should always be to keep a backup timer, but things had gone so smoothly in the past that I broke this rule.  Luckily Christine DeCarli had started her phone timer at the start of the race.  Without her, we might not have had results for this race!

As it turned out, we had to keep results the old school way, with a pen, paper and a stopwatch (although not completely old school, it was an iPhone stopwatch). But we managed to get everything worked out, and results are available here.  Congratulations to Bree Wee who won the full distance event and Kanaipono Eckart who won the peawee race.  Also, thanks to everyone who volunteered in the rainy conditions, including Christine DeCarli who gave up part of her Mother's Day morning to help at the last minute!

Up this weekend is the Queen K Tri Club's Half Marathon and 10k Training Runs starting at 7 a.m. on Sunday at Old Airport Park.  The runs will go from Old A to Alii Drive, past Casa D'Emdeko and back.  There will be aid stations every 1.5 miles and Big Island Running Company's aid station will be located at the 10K turnaround.  This event is free and is great training for Ironman 70.3 Hawaii and the Kona Marathon/Half Marathon.  We'll see you out there!
Posted by Melissa B at 6:12 PM No comments:

Last weekend, I was on the mainland to visit family ... and to run a race!  The Indianapolis Mini-Marathon is the largest half marathon in the U.S. with over 37,000 registrants and over 30,000 finishers.  This year, one of those finishers was my mom! Here's a little bit of her story in honor of Mother's Day.

In January of 2011, I headed to Maui to run the Maui Oceanfront Half Marathon and to visit my mom.  Somehow I talked her into running the 5k, even though she wasn't running at all at that point.  But she put on her game face and ran the 5k in 41:34.  Here we are celebrating after the run:

But she wasn't happy with that time and called me a couple of days later to see if I could make her a Couch to 5k Schedule.  Of course I was more than happy to help her out and sent one over.  With the weather and race schedule in the Midwest, I don't think she got a chance to race again until the 2011 Kona Marathon 5k. Although I can't find the official results, I think she lowered her time there to 38 minutes.  Over the course of the next several months, she found more 5ks to run in at home, ending up with a PR of 33 minutes and an age group award!

At this point, I think she finally started enjoying running (isn't that what happens when you start getting faster?).  The next challenge for her was a 10k.  So, I made her another schedule and we put the 2012 Kona Marathon 10k on the calendar.  She kept with it and increased her miles over the spring and was ready to go by June of last year.  She finished her first 10k in 1:13:45.

As happy as she was to finish, she was also a little disappointed.  At the Kona Marathon races, only the half marathon and marathon finishers get medals, and she really wanted a medal of her own.  So she said that she was going to do the half marathon in 2013 and get a medal.  She kept up with her running over the fall and I made plans to run the Indianapolis Mini-Marathon in May, signing her up for the race as her Christmas present (and yes, I think she did actually appreciate the gift)!

This time I put together a schedule for the half marathon that she followed pretty faithfully throughout the spring, running all over the country, including Indiana, St. Louis, Maui and the Big Island.  One of the highlights of the training (for me) was getting to run a 10-miler with her in Maui. And then all of the sudden it was race day!

After a really rainy Friday evening and a somewhat worrisome rain forecast, we woke up to overcast skies, 59 degree temperatures, and no rain - perfect running weather.  We headed off to our corrals and got ready to run.  We were in different corrals, so I didn't actually run the race with her, but she managed to snap several pictures during the run:


After coming off the track, you start heading back into town and the finish line.

Although she didn't get any pictures of them, this race has tons of on-course support, bands and entertainment along the way.  From the tap-dancing ladies to country cover bands to cheerleaders and the cast of the Wizard of Oz, you were constantly seeing something new.  And the aid stations were amazing - it seemed like there was one every 1/2 mile!

After I finished my run, I headed back to the finish line to try to catch her finish.  She was hoping to finish around 3 hours, depending on how much walking she had to do towards the end. But I was getting text updates on her status and knew that she was going to crush the 3-hour mark.  As you can imagine, with 30,000 people I was worried I was going to miss her, but then I saw her. Unfortunately she was on the other side of the road, so I was only able to capture this photo with lots of other people in it.  That's her in the center of the photo in the pink Run Big top (of course!) with a khaki jacket around her waist. 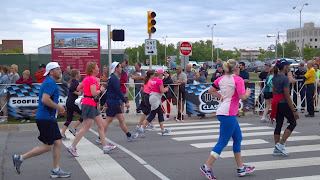 She ended up finishing in 2:45:01 - a fantastic time for her first run. And she got her medal! I caught up with her at the end of the finishing chute and got a picture with our medals. 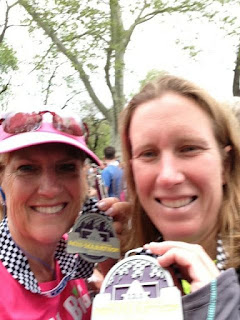 I was and am so proud of her! I don't know that she'll tell you she loves running, but she's sticking with it.  I know she does love the fact that she's lost a significant amount of weight, improved her overall health and reduced a lot of pain problems that she'd had previously.  And of course that she's done something she never really thought she'd do.  I haven't talked her into doing a full marathon yet, but she has said she might run another half marathon - maybe even the Kona half this year!

Happy Mother's Day, Mom and all the other mothers out there - runners or not! And hopefully this can also serve as motivation and inspiration for other people who may be on the fence about taking up running.  It's never too late to start!
Posted by Melissa B at 8:31 PM No comments: