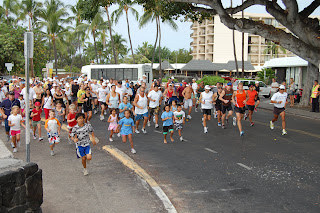 Yesterday was another great Peaman event at Kailua Pier and for once the weather wasn't beautiful! But the cloudy, overcast skies provided perfect running conditions for the 10 mile, 3.5 mile and 1 mile runs - no swimming this time around. We really lucked out because a sunny day could have really cooked everyone.

As usual the turn-out was great. Logistically, things were a little more difficult since there was a bonus cruise ship in town. We probably got in their way and I'm pretty sure people had to run over some cruisers to get to the finish line. But everyone made it work.

Since Jason is running the Country Music Marathon next weekend in Nashville, he sat this race out, but took lots of great pictures. In addition to the ones I've included here, you can check out the entire album here.

For the 1-mile distance, runners went from the pier to Bubba Gump's and back. The top five finishers were Ziggy Bartholomy (6:05), Silas Wiley (7:54), Tim Wiley (8:11), Halle Nottage (9:18), Jamie Yap (9:27). I think some of these youngster's parents must have told them not to run on the road. Because a lot of came towards the finish line on the sea wall, like this: 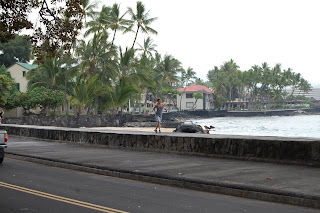 Once the 1-milers finished, the 3.5 milers started coming in. Their route took them down Alii Drive to the Royal Sea Cliff and back. Warren Hollinger finished first in 27:02, with Jeff Dietrichson (28:15) and Mike Schiff (28:34) following behind for the men. For the women, it was Lisa Bryant leading the way in 29:40, followed by Lori Montgomery in 30:41 and Laverne Curry in 30:46. 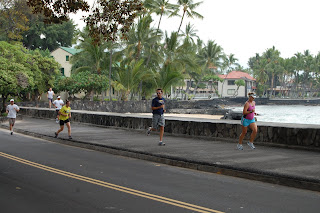 3.5 milers near the finish.

The 10-mile race went all the way down Alii Drive to Keauhou, near the Keauhou Beach Resort. At the turnaround, there was a nicely stocked aid station with water, gatorade and gels. In hindsight, I'm glad I grabbed some water, but wish I would have grabbed another gel!

One of the nice things about the out-and-back course was that once people starting coming back the other way, there was always someone to cheer for or yell hello to. It started with Luis De La Torre, the men's winner, and was followed by Justin Butler, Rani Tanimoto, the women's winner, Jeremy Moore, Ray Whitford, Korey Pulluiam, Sarah Higgins, Toni Reynolds, Michelle Whitford, Bobbi Reif-Acheson, Eddie O, Jason Heady, Keola Wimbish and many more. It was great to see so many people out there participating and to realize how many of them we are getting to know! It gave me a little boost in what was otherwise a pretty painful race, so thanks! 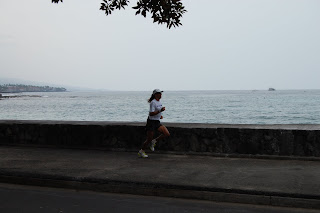 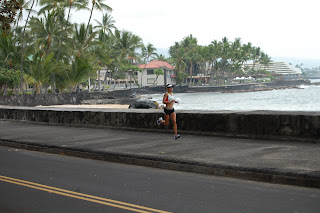 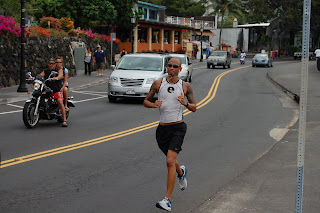 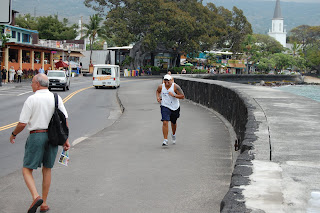 Congratulations to all race finishers of every distance! Full results on the races are here. And as always, thanks to Peaman and all the volunteers for another awesome event! Up next is Polar Bear's Pinto Bean and Pinata Biathlon on May 2. That event is only for the keiki and men 20 and over. But women, don't worry - we get our chance the next weekend with Bree Wee's Chickpea Biathlon on May 9, open to keiki and women 20 and over.
Posted by Melissa B at 2:33 PM No comments:

This past weekend was a busy one for us, even though the store was closed on Sunday for Easter. I had signed up for the Mac-A-Thon 10K on Saturday morning and Jason had to handle the first run for our half marathon training program.

The Mac-A-Thon is the Big Island's longest running race, in its 29th year. The 10K and 5K courses start at the City of Refuge in Honaunau and go north almost to Kealekekua Bay. A rolling course that turned out to be quite a bit more challenging than I expected. Of course I had been warned ahead of time that the course was tough and that I'd be wishing I ran the 5K instead of the 10K. But the big draw is the macadamia nut pancakes after the race, so I figured I should push through the 10K.

Before the race, I saw a couple of familiar faces: Jolene, Rich and Ryan Mears, Choy Bacor, Steve Pavao, DJ Blinn, and Marie Kuramoto from Hilo and Joe Loschiavo. After a pre-race blessing, we were off. There was a slight hill at the beginning, but once you crested it, the whole course was in front of you. At that point I could see Rani Tanimoto in the lead, followed by a chase pack of 4 guys. On the way out, I kept up a pretty good pace. The way back, however, was a different story. You could see forever and nothing seemed to be getting any closer. I'd climb one hill only to see 4 more in front of me! I thought the 5K turnaround would never get there and I knew I still had about 1.5 miles to go after that! When I finally made it to that turnaround point, I was pretty happy and able to pick it up a little bit for the last mile. Luckily, the last .3 miles or so were all downhill. Even with my slower pace on the back half, I still managed to finish in second place for the women - only a mere 12 minutes behind Rani who won the overall race. Apparently, this is the 12th time in a row she's won the women's race. Very impressive on a tough course!

I forgot my camera again, so here are a couple of pictures from Marie Kuramoto. The first is a picture of the women's 10K top three and the second is the Hilo crew. They all finished either first or second in their respective age groups! Full results are here. 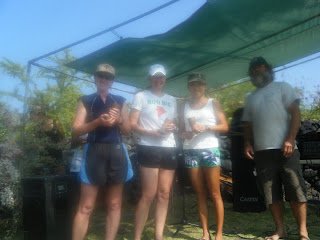 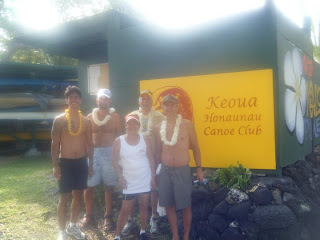 After the race, we had the macadamia nut pancakes as promised and they did not disappoint! They were huge and delicious. There was also a bake sale, farmer's market, silent auction and raffle. Mahalo to the Keoua Honaunau Canoe Club for a great event!

Meanwhile, Jason was busy running with 15-20 of our half marathon training participants. For their first run, the various groups were going anywhere from between 2 and 6 miles. Everyone did really well and seem to be looking forward to the training. And we're still getting interest in the program from new participants everyday. We're really looking forward to watching all these groups progress.

Sunday was a rare day off for us, since we closed down the store for Easter. Since we're open 7 days a week, we don't get as much time to explore the island as we'd like. But we took advantage of that opportunity on Sunday and headed up to Waipio Valley to do some hiking (and a little offroading, too). It's still amazing to me how you can drive an hour or two on this island and be in a completely different climate area. We left sunny, 80 degree Kona to head to rainy, 60 degree Waimea and Waipio Valley.

Even through the misty rain, the views were amazing. 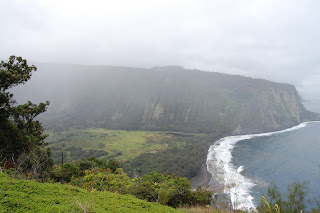 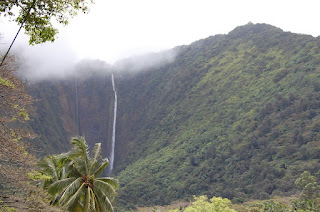 We rode up in Jason's truck, so we were able to drive down to the beach area (4WD required). As we headed down, we took one road that led into the valley. After a bit, we encountered a creek and Jason got ready for a creek crossing by testing out the depth of the water. 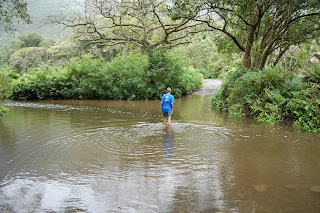 It looked passable, so the FJ powered on through. We passed through two more creek crossings until we encountered the rushing river below. 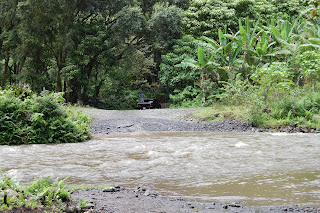 A friendly local advised us not to cross that one. But as we pulled up, a pickup following behind got ready to cross through (to get to a party at someone's house on the other side! I can't imagine having to cross rivers to get to my house!). I didn't manage to get any pictures of them crossing, but they made it, with a couple of anxious seconds. After watching that, we decided we weren't going to risk it and headed back towards the beach.

When we got down to the beach, the sun broke through for a little bit and I managed to get a picture with some blue skies. 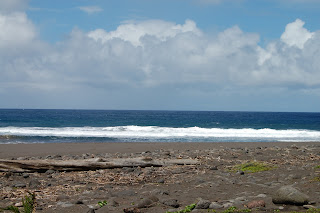 Jason still had to do his medium long run for the day, and thought there would be a good trail to do it on the other side of the valley. In order to get there, though, we had to cross through the same river that we didn't cross in the truck. We loaded up our packs and picked our way through the rocks and surf very carefully. It was a long process, but we managed to make it without incident. We thought there had to be an easier way to do it coming back, though.

After the river crossing, we took a good look at the trail Jason wanted to run. Yes, it's that switchback trail up the side of the cliff. 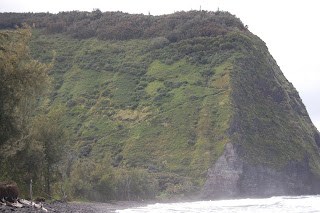 Jason loaded up his FuelBelt and took off. Meanwhile, I started climbing at a much slower pace. I couldn't believe how steep it was and how difficult! I made it up probably about a mile before I caught Jason coming down the other way. Apparently he had made it to the top, but things were too wet to continue safely on. Instead we took some pictures and picked our way down. I think I went even slower that way than on the way up! The picture below shows about how high we climbed and shows the road we took down in the truck. 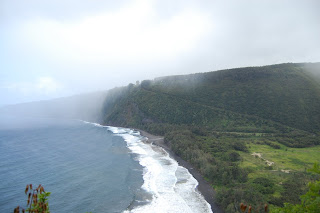 Once we made it to the bottom, we thought all the danger was over. The only thing left was to cross the river that we had already crossed once, hopefully in an easier location. We picked a spot that was a little further upriver before the really bad rocks. Jason started in, with me not too far behind him. In the middle of the river, the rain started pounding. Before too long we realized that this was definitely not the best place to cross, since the water was fast-moving and over Jason's head. He got swept downriver with the backpack over his head, for the most part. Unfortunately, I was too close behind him or too stupid to turn around because right after he went down, I went down, too. With the camera bag and car keys! My flip flops flew off, my water bottle went flying and I really thought I was going to be swept out into the ocean. But we were both able to grab onto some rocks. Jason pulled himself out first and then came back to grab the camera bag from me. We were both then able to crawl out over the rocks. Miraculously, we only had some minor scrapes and bruises and only lost my two flip flops and one of Jason's. My cell phone, which was in the backpack, survived after some drying out, as did my camera and all of my lenses. And as you can see, the photos I took that day still came out, too.

So that was our great adventure of the weekend. We made it home and definitely slept soundly that night. I think it'll be awhile before we're looking for another adventure like that!
Posted by Melissa B at 5:45 PM No comments: