This post is going to be pretty brief, since I wasn't able to actually participate in the Peaman race yesterday, so there's not much of a real race report.  However, I did stop by for a bit and watched part of the swim and got a couple of pictures.  In preparation for next week's Super Bowl, the theme of the event was the Super Bowl Shuffle.  The Echo City Knockouts showed up in full uniform and one of them even dressed up as a football. 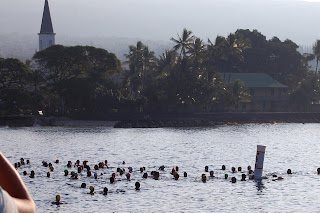 The event's distance was a 1/2 mile swim and a 3.1 mile run (or roll). The ocean didn't look too rough, but it's winter here (haha) so the occasional swells are coming in.  It got a little bit rougher when the start gun sounded and a 100 swimmers started churning. It even looks tough back in the peawee race! 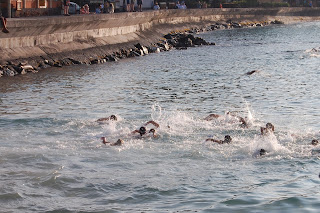 It's a different perspective when you're not out swimming.  I got to watch some of the relay teams wait for their partners: 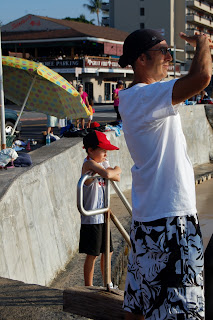 I also got to watch the run-only start, which actually had a lot more people than I expected! Of course about 10 of those people were on rollerblades. And I got to catch everyone coming out of the water and into transition. It looked like everyone was having a lot of fun. 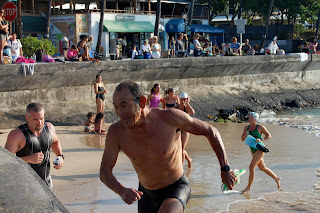 At this point, I had to leave, so I missed the top finishers.  But full results are available here. When I left, I headed over to the pool to do a 1 hour timed swim for distance.  We did this last year, and I was just hoping to do better this year.  Well, I just got the results and I made it a whole whopping 10 yards further this year than last year! At least it's improvement, right?

Up next weekend is the Team Mango's Springtime Triathlon at 7 a.m. Sunday at the pier.  It's a 1/2 mile swim, 15 mile bike and 6 mile run - great preparation for people training for Lavaman Waikoloa!

Hilo to Volcano Ultramarathon and Relay 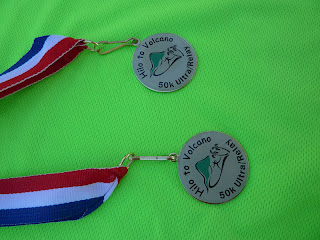 This past weekend it was time again for the Hilo to Volcano 50K Ultramarathon and Relay.  Jason has participated in this event the last two years, and this year I joined in, too.  But only for the relay portion of the event.  After running that course, I have nothing but respect for those runners that complete the ultra by themselves (well, maybe I think they're a tad bit crazy, too!).  The course is all uphill - going from sea level in Hilo to approimately 4,000 feet above sea level in Volcano!

The ultramarathon starts at 6 a.m. at Coconut Island.  At that point, it's still dark out, so ultramarathoners are required to wear reflective vests and lights. This race grew enormously in the past year, up almost 50% over last year, with 40 individual finishers and 38 relay teams.

After the ultrarunners head out, it's time for the relays at 6:30.  It's still pretty dark at that point, so the whole first leg of the relay is essentially in the dark.  My team, the Kona Wahines, was made up of me (first leg), Lokana Reed (second leg), and Maggie Leite (anchor leg).  Jason's Big Island Running Company team was Sal Salmi (first leg), Tim Urbine (second leg) and Jason on the last leg.
The relays generally consist of three person teams, switching off at every even numbered mile marker.  So each relay member runs 5 2-mile legs.  They also allow super teams, which is anything over 3 runners.  The super teams can kind of make up their own rules for switching off, but they aren't eligible for awards.  As you can imagine, the relay exchanges are pretty crowded at the beginning of the race, but they begin to thin out as the race goes on.
But the relay exchange points are actually pretty fun.  You get to chat with the other teams as you wait for your runner.  We ended up leapfrogging quite a bit with another Kona team - Go!155! They'd be ahead at some exchanges and we'd beat them to others.  It certainly keeps things interesting.

One unknown for any race is always the weather.  In Hilo and Volcano you always worry about the rain.  But this year, the weather was perfect.  It was a little overcast in the beginning, but cleared up and was nice and sunny in Volcano.  And since you're up at elevation, the heat wasn't too bad, either.  We even got to see a couple of rainbows while out on the course.

Kona was very well represented in the race.  Below is a picture of Kona girl Jolene and her son getting ready to cross the finish line.  Jolene ran the entire distance and looked amazingly fresh the whole time! Congrats, Jolene! You are awesome! 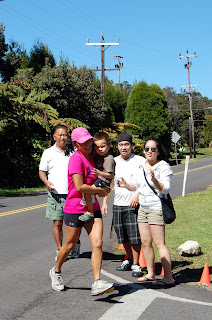 Since we were out on the course, it was kind of hard to know what was going on in the race.  But Jason's relay team finished in second place behind Royal Flush.  And our team finished! Here we are getting ready to run across the finish line:

Full results from both races are below.


Congratulations to all of the finishers and huge mahalos to the Big Island Road Runners, especially Alan Ryan, Keith Marrack and Dano Banks who put on this great race.  Also, special thanks to Brittany Leite for being our awesome driver for the race!  We can't wait until next year!
Posted by Melissa B at 3:18 PM No comments: