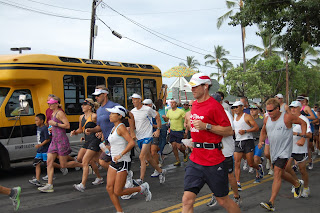 What type of weather can you expect in Kona, Hawaii on a Sunday April morning? Usually lots of heat and sunshine. But yesterday, we were lucky to be blessed with overcast skies, slight rain and cooler temperatures. Ok, so maybe the tourists from the cruise ship weren't too happy with the weather, but the participants of Peaman's Carboman 10-mile Mosey, Roadrunner 3.5-mile Romp and 1-mile Mighty Mouse Scamper 2011 certainly were.

There was quite a bit more traffic at the pier than usual, since there was a cruise ship in the bay that was letting people off right around the time of the race. Luckily the race was a run-only event, so no one had to swim and dodge the tenders. We also had to contend with a sidewalk that is still torn up from the March tsunami here - the orange construction barriers take away a little bit from the natural beauty that is usually the backdrop of our photos. Speaking of photos, both Jason and I were running today, so we were lucky to get photo assistance from Nori Becker, who was more than happy to take photos instead of running. Mahalo Nori - we hope you get back to running soon, but in the meantime you're welcome to take pictures for us anytime! 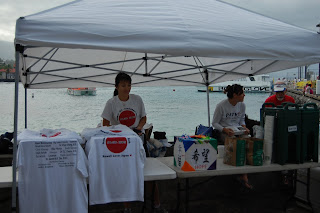 The race this weekend was also special because money was raised to help the victims of the Japan Earthquake and Tsunami. Organized by Gary and Junko Shields, this was the second of three events in their Hawaii Loves Japan fundraising series. Hawaii Loves Japan shirts were also available for a donation. The third event comes this Saturday at 4 p.m. as they organize a Community Bike Ride from Old Airport Park to Royal Kona and back. Come out and support the Japanese survivors! 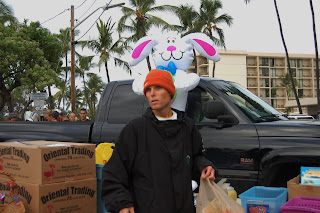 Peaman and the Easter Bunny

This race also celebrated Easter, with Easter baskets available for the keiki to fill with candy and toys. The Easter Bunny also made an appearance at the finish line, as you can see behind Peaman! 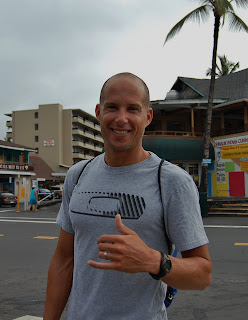 Ironman pro Chris Lieto attended the event with his kids, but didn't race. I think it had something to do with recovering from winning the Memorial Hermann Ironman 70.3 Texas last weekend. Congratulations Chris and thanks for still coming out to cheer others on! 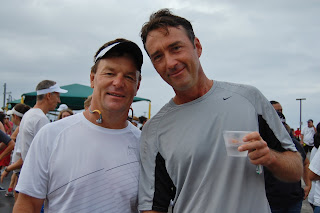 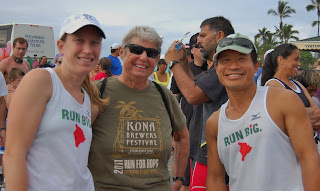 Me, Coach A and Chitwin before the run

In the Mighty Mouse Scamper, Juan Sepulveda came in with a blazing time of 5:19. He was followed by Ziggy Bartholomy in 5:58. Silas Wiley and Kaiden Leito had their own little battle for third place, with Silas finishing in 7:35 and Kaiden finishing in 7:37. You can see Silas checking on the competition in the picture below. Great race, boys! 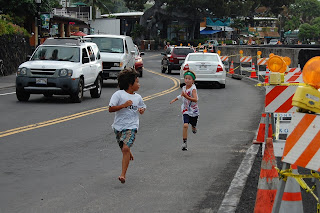 For the girls 1-mile race, Naomi Ney out sprinted Bayleigh Wiernicki to win with a time of 8:46 to Bayleigh's 8:48. Elysia Yamamoto was third in 8:52. Here are some pictures of some of the other 1-milers: 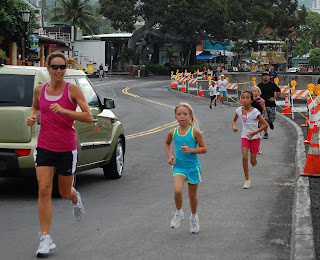 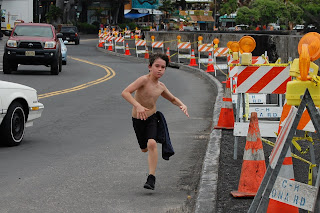 Furious sprint to the finish! 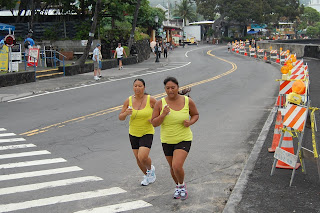 Yellow ladies bringing some color to an otherwise gray day! 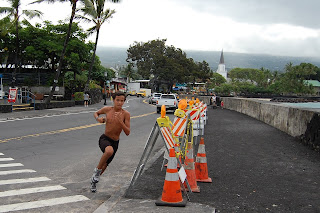 Chris Prater - watch out for this speedy kid! 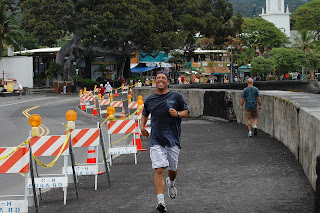 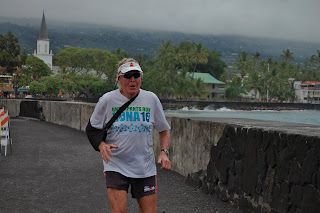 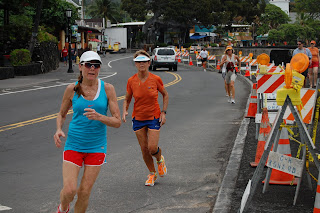 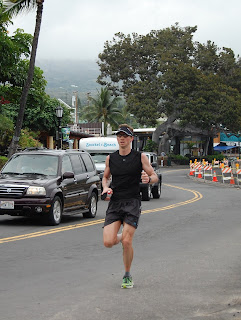 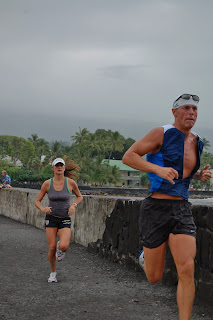 Brooke Myers hot on the tail of Jeremy Withrow 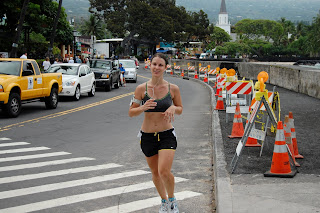 Stacey Newman - she only decided to do the 10-miler 2 miles into the race!

Full results from all of the races are here. Congratulations to all participants and thanks to the volunteers!

Next weekend is busy one, with several races and community events. First on Saturday is the longest running 5k/10k on the island, the Keoua Canoe Club's Mac-a-Thon. The race is held in Honaunau starting at 7 a.m., but the big attraction is the Mac-nut pancake breakfast they hold afterwards. They also have a silent auction of local art and jewelry and have some great prizes, too! More information is available here.

Finally, the Hawaii State Championship Time Trials (Bike) are held on Saturday and Sunday on the Queen K Highway. Individual trials are Saturday and Team Trials are on Sunday. More information is available on Hawaii Cycling Club's website.
Posted by Melissa B at 12:05 PM No comments:

Last week, UH-Hilo announced that it was axing its men's and women's cross country teams.  Not everyone is content to let the Vulcans' XC teams die without a fight.  Today comes an article from the Big Dog detailing the wave of support for the condemned harrier programs.  Big Island Running Company is proud to voice its support for the effort and invites all its friends to join us in seeing if there's a way to rewrite this sad ending for a team that really is a valuable asset to our community.


[Ed.'s aside: Why does it seem like track and cross country are the first to go when budgets are cut?  I know the answer that any sober athletic director would give would involve a discussion of revenue versus non-revenue and other trivial bits, but I'm suspicious that it's because ADs are much less concerned about being attacked by a bunch of angry runners with single digit body fat than an irate football or wrestling team. In fairness, UH-Hilo has neither a wrestling or football team, so it must have been the tennis players and their racquets that beat out the cross country runners' imposing biceps.]
Posted by Jason B. at 3:52 PM No comments:

This spring we've started bringing in some new styles and colors of our logo gear into the store. In addition, we've been switching over to Brooks and Nike shirts, and people have been raving about the great fit and look of these new shirts. Here are some pictures of the new arrivals! 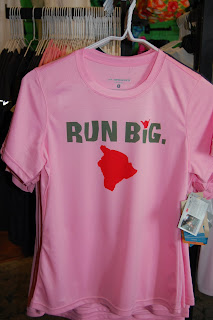 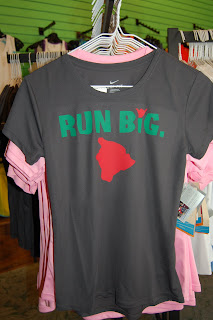 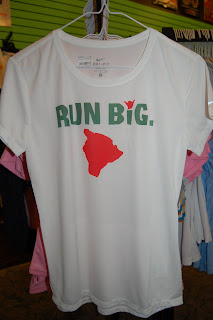 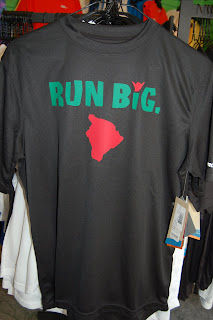 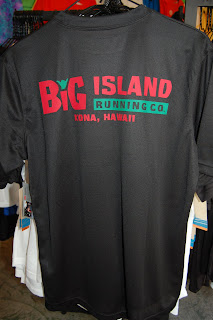 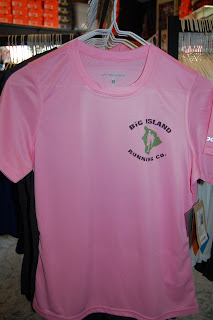 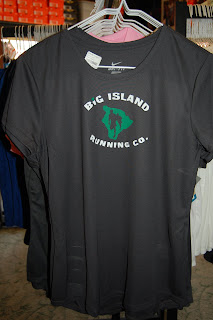 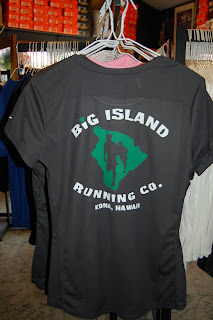 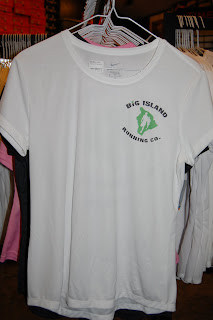 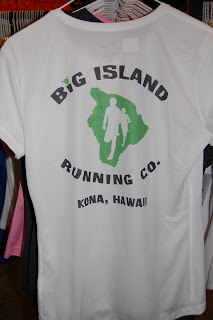 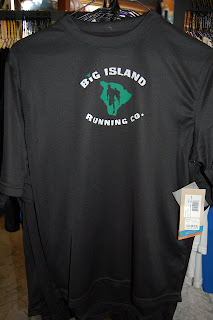 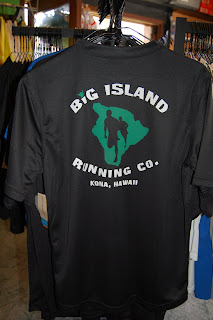 All of our new shirts are $29.95. If you'd like to order one, email us at melissa@bigislandrunningcompany.com or call 808-327-9333. (Online ordering is currently unavailable.)

Special thanks to Eddie and Rose of Eddie O Designs for the printing of the black and anthracite shirts!
Posted by Melissa B at 8:44 PM No comments: