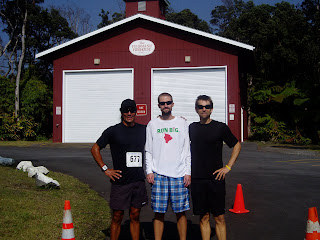 I was lucky enough to be a part of a relay team competing in the Hilo to Volcano 50K on Saturday, January 23, 2009. Our team, creatively named Big Island Running Company, consisted of me and two other Kona athletes who were nice enough to join me, Luis De La Torre and Eric Neilsen. Our team was also ably assisted by crew member Wendell Braswell, who couldn't be talked into running a leg, but did drive a support truck for us and made sure that our pre-race diets were lacking in neither Mexican food nor libations.

First, a little background on the race. The race, put on by the Big Island Road Runners Club, begins in Hilo at sea level. It finishes in Volcano, 50K (31.1 miles) and over 4000 ft in elevation later. 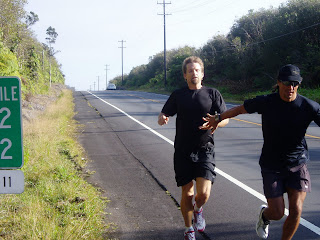 The individual runners started at 6:00 A.M. and the relays started at 6:30 A.M. The weather in Hilo was nice and cool--I would guess mid-60s--but there was pretty bad vog down in Hilo, the kind of vog you can taste. Luis ran our first leg, which was 2.7 miles. The first and last legs are the longest (2.7 and 2.4), with the rest of the legs being 2 miles. Luis opened a nice gap on his leg and tagged off to me for the second leg. At this early stage of the race, the legs are pretty flat, so I was able to find a rhythm pretty quickly and the leg felt like it was over just as soon as it began. I tagged off to Eric and he encountered the first hilly leg of the race--an occurrence that would be frequently repeated as Eric seemed to routinely draw the hilly legs. There is some irony to Eric drawing the hilly legs because he was the only one of us who had previous experience in the race and accordingly he was instrumental in determining our order for running. Glutton for punishment or foggy memory? Either way, he drew some real bears. 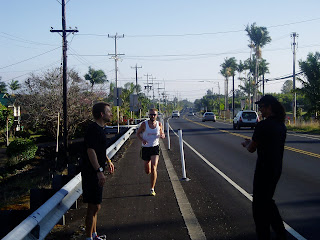 I won't bore you with a blow-by-blow of the 15 legs, but I will say that I was surprised at how much tougher the legs got toward the end. While I was prepared for the legs to get hillier (you do have to climb 4000+ feet, after all), I had forgotten the toll that the thinner air at altitude would take. My last leg started at about 3500 feet and by the time I got to the end I was really sucking some air (and vog).

In the end, we finished a few ticks under 3:29, not a bad effort. We managed to build a pretty good gap on the second place team, the Ass Clowns, which is good because it's been a long time (but not long enough) since I lost to a bunch of ass clowns. 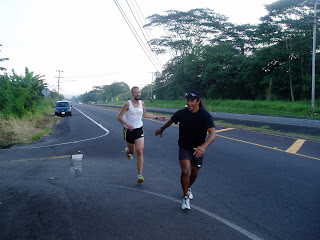 Luis headed for the finish: 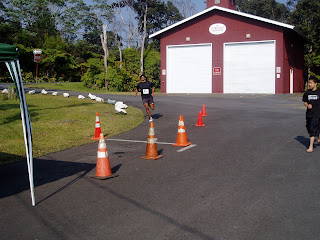 The individual race was a good one, with Eric Glaus hanging tough for a victory over 2nd place Alan Ryan. Big Dog's blog has a post with individual results and some more photos from the race.

Here are the results from the relays:

Interested in being a part of a running club on the Big Island? Maybe the Big Island Road Runners Club is for you. Big Island Road Runners Club events are listed on our calendar. You can download a membership application here. Here's how the club describes itself:
"We are a non-profit group which organizes competitive and non-competitive running events year round so that we can have plenty of excuses to have fun while staying healthy, fit and awash in endorphins. Even if you are a walker (or race walker), please join us.
With membership you will enjoy entry fee discounts for races sponsored by the BIRR and receive our national newsletter. You will also be supporting our scholarship fund, refreshments, a new web-site, and supplies needed for our running events.
Dues ($10 for individuals, $15 for families) are used mainly for Fun Run prizes, race start-up funds and our annual picnic. Non-members will need to pay a $2 fee toward insurance to participate in our fun run events.
Please join today and also become an active member of our club – we need support at each fun run and race event."
Posted by Jason B. at 1:49 PM No comments:

While the rest of the country was battling bitter cold last week, we had our own weather event here in Kona. Starting mid-week a large swell came up creating 10-15 foot waves on the west side of the Big Island. Most of the beaches were closed for a couple of days because of the dangerous waves, but that didn't stop plenty of surfers and boogie boarders from taking advantage of the opportunity to get out in the waves. Here are some pictures that were taken about 2 miles south of the Big Island Running Company. 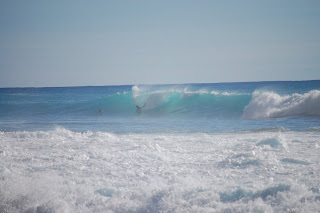 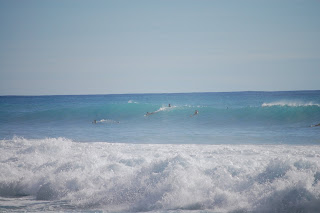 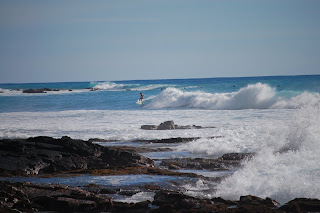 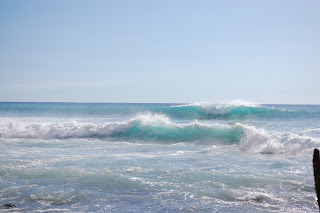 The waves were so big there were even people surfing right in front of our store! And there was plenty of splashing onto Alii Drive.

The surf died down a little bit over the weekend, but we're back in a high surf advisory again today and tomorrow, expecting 10 foot waves. Of course I didn't realize that when I went out for my swim this morning, so it was a little more difficult than I expected. It also left me feeling just a little bit seasick. But the swim wasn't all bad - I saw a huge manta ray swimming right under me for a couple of minutes toward the end of my swim. I'll admit it scared me at first when I didn't know what it was, but it just swam along peacefully with me. It was a nice surprise to end the swim.
Posted by Melissa B at 1:09 PM No comments:

Melissa Braswell, you are a Peaman!

As we have blogged about before, Kona is lucky enough to have a series of races put on by local legend Peaman and his Frozen Pea Productions. For anyone who hasn't had the privilege of participating in or witnessing one of Peaman's races, they are some of the best local, grassroots races and fitness extravaganzas that yours truly has ever seen. All of the events are free and they don't require any preregistration: you just go out there, do your best, have a good time, get a numbered popsicle stick at the end of the race, and sign out. Participants range from keiki with water wings, to pro athletes, to people just looking to sweat a little bit and have a good time. December 2009's Peaman event was Peaman's Birthday Bonanza, which was a duathlon consisting of a 1/2 mile swim and a 3.9 mile run.

Melissa and I share a goal of becoming passable open water swimmers. We figure that, being blessed with living in Kona and having year-round access to beautiful and warm blue water, we really have no excuse not to take advantage of it. Melissa is further along in reaching that goal than I am. She has been going to some group swims at Kona Aquatics and has been regularly going for swims at Kailua pier. She decided that Peaman's Birthday Bonanza would be the perfect opportunity to test out her swimming and make her debut in the world of multisport. 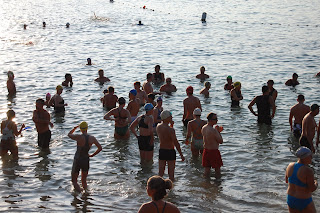 The day of the race featured picture-perfect weather--a real surprise, I know--with the temperatures in the mid 70s for the start of the race. After some words of instruction and inspiration from Peaman, the swimmers were off. It was pretty hard to see much of the swim race from my stationary vantage point on the seawall, but the first swimmer, local top fish Nick Garrett was out of the water in around 12 minutes with a gap of about 30 seconds on the field. Melissa finished her swim in about 24 minutes--the fastest she had ever swam a 1/2 mile--and headed for the transition. She looked comfortable, but also glad to be out of the water. 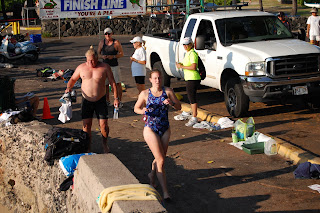 After a quick transition (we had rigged Melissa's Lunaracer flats up with some trigeek chic elastic race laces (available at the Big Island Running Co., of course) that seemed to work really well for her), Melissa was off on the run course. Again, my commentary on the run is a little limited because I was just stationary at the start/finish, but Melissa was strong on the run. She completed the run in about 31 minutes to clock a final time of 55:38. I could tell that she was doing really well on the run because, while she was definitely in the back third of the competitors getting out of the water, she ended up finishing 25th out of 59 participants who finished the full course, a very solid showing indeed! Imagine how she's going to do once she's had a chance to really get into this swimming thing.

As an interesting side note, while Melissa was out on the run course, I saw Lance Armstrong cruise by the pier on his bike. My thinking is that once he takes care of business at le Tour, he's contemplating his debut on the Peaman circuit. Sorry, no pictures of Lance; I was a little too slow with the camera.

Full results and additional pictures from the race are available here. 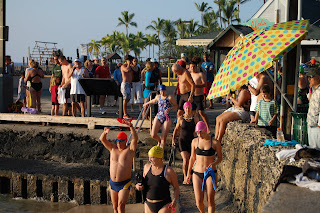 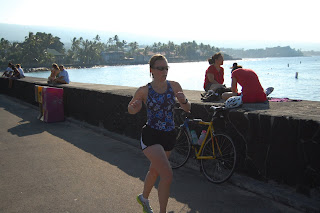 I must be getting older, since I didn't even make it up to midnight on New Year's Eve this year! And to be honest, I didn't really mind that much. The reason for my early retirement to bed was the New Year's Day Resolution Run 5K in Hilo, and I had to get up early for the drive. Thankfully, the race didn't start until 9:30, so I didn't have to get up at a ridiculous time, but it was still dark when I started the drive.

The sun started coming up just as I was driving up the Saddle Road (the road connecting the Hilo side and the Kona side). For those of you that don't know, the first 10 or so miles at the west end of the Saddle Road is rutted, curvy and all around awful. Add to that the fact that I couldn't see much in front of me because of the blazing sun, and it was a white knuckle ride for about 20 minutes. Once that challenge was over, it was smooth sailing into Hilo.

I arrived at Coconut Island in Hilo for the race around 9, signed in, met Wayne "Big Dog" Joseph who hosted the race, and took a little warm-up. By 9:30 about 75 people had arrived to start the New Year off with a little 3.1 mile run. The race course took us out through the Coconut Island Park, to the main road and along the bay. A very nice, flat course. 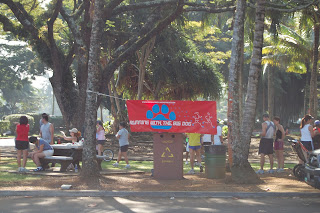 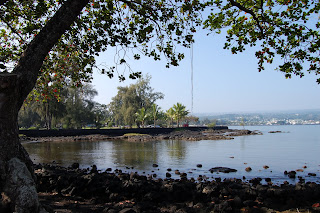 View of beginning of course 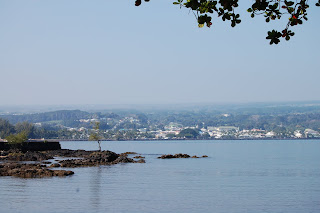 Since I was on my own (Jason stayed back to open the store), I wasn't able to get any photos of the actual race. But Alan Ryan won the men's race in 18:25 and Lory Hunter won the women's race in 22:25. Full race results are available on the Big Dog's blog: http://waynejoseph.wordpress.com/2010/01/01/new-years-resolution-5k-runwalk-results/
Everyone seemed excited about the start of a New Year and the Resolution Run was a great way to start it. As one fellow runner put it, everyone ran their best time of the year in the Resolution Run. Hopefully there are many more PRs to come.

Once the race was over, I headed back over the Saddle Road to Kona. It was a rare clear day and along the way, I was able to get some great shots of Mauna Kea and Mauna Loa. 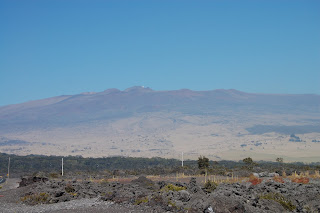 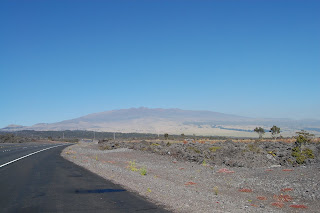 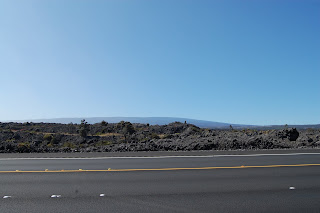 Mauna Loa behind the lava

Happy New Year everyone!
Posted by Melissa B at 4:42 PM No comments: