Last Sunday, Jason and I ran in a 5k Fun Run put on by Kealakehe Senior Allison Alterman as part of her Senior Project.  The run congregated at M2 Fitness in Pottery Terrace, with the start actually about 1/4 mile down Walua Road to make sure we didn't have to cross any roads and had a wide shoulder to start on.

The start is about as fast as you can get with approximately the first 1/2 mile all being downhill.  Chico Barrios took off like a bullet and led the race for about a mile, when Jason finally chased him down.  After coming off Walua Road, we turned left onto Alii Drive and ran to Alii Lani and back.  For those unfamiliar with the route, we definitely hit several hills in there.  And, of course, we had to make up for that initial downhill start, since the last 1/2 mile of the race was all uphill.

Even with all the hills, it was great to run a different route from the normal Alii Drive jaunt.  Great volunteers helped keep us safe crossing the Lunapule intersection twice and kept us hydrated with an aid station that you hit twice at mile 1 and 2.

Post-race refreshments were held back at M2 Fitness with ice cream! Allison brought popsicles, fudgesicles and ice cream sandwiches, which were a great relief after the hot run.  And for some reason the water brought by Jay Plasman seemed extra tasty and cold this week.

Race results are available here.  Jason took first overall in 19:25, followed by Brooke Myers in a fast 20:43.  Alex Yosi was the next male in 21:05 and Jenny White was the second female in 21:25. A total of 85 participants completed the race.

Allison had some great random prizes to give out to lucky runners, including some Timex Ironman watches.

Congratulations, Allison, on putting together a great race! Also, mahalo to Allison for the photos in this post, which came from her cameras at the race.

Jason also won a comped entry to the Cinco de Mayo swim, which he graciously passed over to me.  For those of you who are waiting for it, Cinco de Mayo swim will not be Jason's swimming debut. However, we will be making our Team Mango triathlon debut with a relay at this weekend's Captain Cook Challenge. The race starts at 7 a.m. Sunday, April 29 at Kealakekua Bay with a 1-mile ocean swim, followed by a 2.5 mile trail run/hike from the bay to the top of the Captain Cook monument.  From there it's a 32-mile hilly bike through Captain Cook, followed by another run - this time 4 miles on the beach road between Kealakekua Bay and Honaunau.  This race promises to be tough, but as always, a fun and beautiful event.
Posted by Melissa B at 5:22 PM No comments:

I feel like we've been spending so much time racing lately that we haven't been able to keep up with the blogging of it! Here are some of the things that have been going on in the past couple of weeks:

One of the biggest things that's been keeping us busy lately is preparing for our first ever "Keep on Running Clinic."  Mary Mullahey of M2 Fitness had the idea to provide video gait analysis, a physical therapist  consultation and a shoe consultation for runners in one compact time and place.  Interest in the clinic was great and we were able to fill 12 spots for the day.

Participants started at the video gait analysis station with Jason where they were videotaped running on the treadmill with and without shoes. 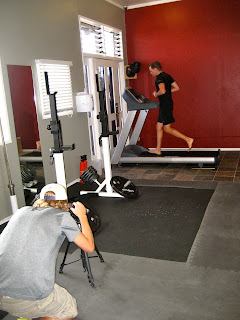 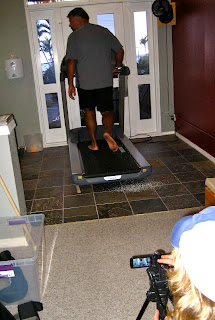 Jason then replayed the video and pointed out various characteristics of the runner's form. (This station had a slight malfunction early in the day with the computer equipment, but Jason managed to get it working again and hopefully solved for the next time around.  Thanks to everyone for their patience!)  Participants will also get a copy of their video gait analysis this week that they can keep and refer back to.

After seeing how he/she ran in the video analysis, the runner then moved over to the physical therapy station with Jeff Dietrichson.  Jeff ran various tests on each runner to determine areas of strength, weakness, inflexibility, etc. and suggested stretches and strengthening exercises to help improve those areas. 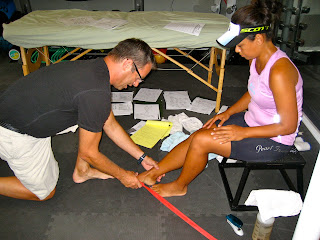 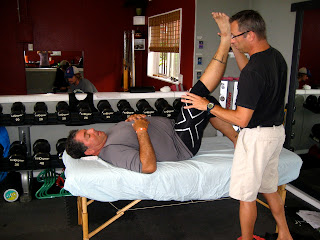 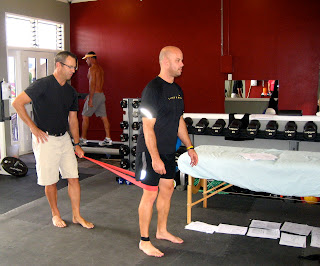 After their physical therapy session, the runners stopped by my station to learn about the shoe options that were recommended for them by Jason and Jeff based on their running form. 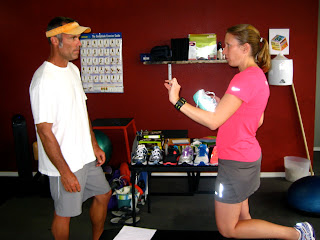 We also demonstrated some of our Trigger Point technology for rolling out sore, knotted muscles and some of our compression gear for recovery as well. 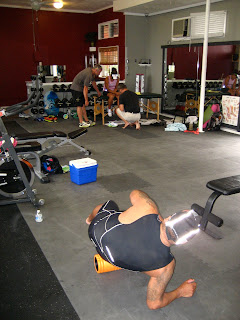 Overall, we've gotten some great feedback on the clinic and hope to offer it again sometime this summer (with a few tweaks now that we know better what to expect!).  This clinic is something that could benefit every runner, whether you are a beginner or have been doing this for 20 years.  We'll keep you posted so you can Keep on Running!  Thanks to Mary Mullahey and M2 Fitness for pulling this all together and allowing us to invade her studio for the day!

Up this weekend is another event starting at M2 Fitness.  Allison Alterman, a Kealakehe senior, is putting on a free 5k Fun Run as part of her senior project.  The run starts at 8:00 a.m. on Sunday, April 22 at M2 Fitness in Pottery Terrace.  The route goes down Walua Road to Alii Drive and back.  The best part is probably going to be the ice cream that follows the race.  Come out and support Allison this weekend!