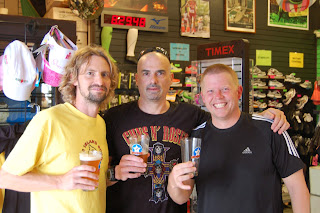 Thanks to Brooks Running, last night we hosted a Guy's Night. Everyone who showed up received a Brooks pint glass, some free Gu from Kona Marathon, discounts on Brooks apparel and a chance to win some Run Big. Brooks apparel.

Instead of just doing a raffle for the prizes, we decided to make things interesting.  Each guy had the chance to show off their bra removal skills - from a mannequin, of course.   Most of the guys were pretty quick with that part of the contest.  The hard part, though, was once they got the bra off, they had to put it back on again.  The fastest six times received a prize.  Here are the results and some photos: 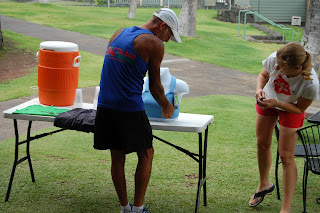 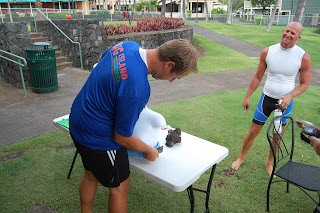 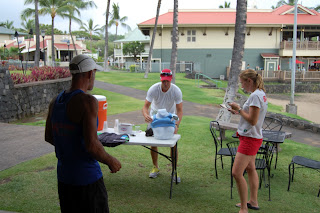 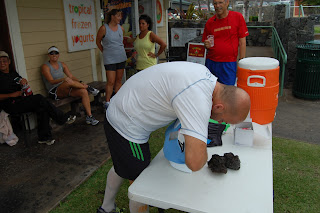 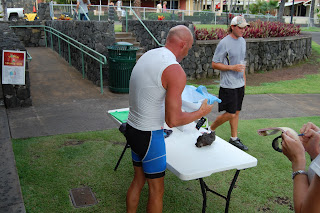 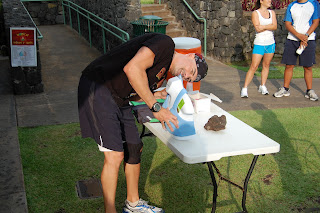 Congratulations to the winners and thanks to everyone for coming out!
Posted by Melissa B at 1:53 PM No comments:

Every couple of months, the Queen Ka'ahumanu Tri Club hosts free, low-key training runs to help people train for upcoming races without having to carry their own water or supplies.  Aid stations are generally every 2 miles or so, and the runs can help simulate a little bit of a racing atmosphere.  Some people go all out on these runs, some use them for some tempo miles and others cruise them as part of their long runs.

Yesterday was the third annual half marathon starting from Old Airport, going south on Alii Drive to Keauhou and back.  The event drew people who are training for Ironman 70.3 Hawaii in two weeks and also people training for the Kona Marathon races on June 24.  34 people completed the 13.1 mile distance, while several others completed shorter distances.

Even though this isn't a true "race", they do keep track of the results.  Results from yesterday's run are on Queen K Tri Club's website.  They also plan on posting more photos in the next couple of days and those should be available here.

This weekend is a rare one without any races! In the meantime, join us from 5-7 p.m. tomorrow, Tuesday, May 22 for Guy's Night.  We'll have free gifts, prize contests, discounts and a group run at 6 p.m.  Also, make plans to come by the store this weekend as we'll be having a Memorial Day Shoe Blowout! We'll be offering many of our old models at drastically reduced prices, starting at $30!  The sale will run Friday, May 25, Saturday, May 26, and Monday, May 28.  Don't miss out!
Posted by Melissa B at 4:33 PM No comments:

Last Sunday, Peaman hosted his annual Mother's Day race.  Polar Bear's Pinto Bean and Pinata Biathlon was a 3/4-mile swim and a 3.1 mile run.  According to the racers I talked to, the swim was pretty choppy and challenging. I wasn't able to race this event, since I was doing the timing.  It was a little bit of a bummer to miss out on the fun, but it was nice to be able to watch it unfold and cheer people on. Also, Jason was out of town, so we didn't get any pictures at the event either.

So this post isn't anything special.  However, for some reason the race results were not posted on West Hawaii Today online as they usually are.  They were in the hard copy of the paper, though, so I scanned them in and have attached them here. Congrats to all the participants! 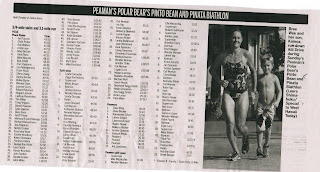 Up this weekend is the Queen K Tri Club's 13.1 High Tempo Training Run.  It starts at 7:00 a.m. at Old Airport, goes south on Alii Drive to Keauhou and back.  There will be several aid stations along the run, including one at Honl's where we'll be!
Posted by Melissa B at 5:06 PM No comments:

Last Sunday marked the first appearance of the Big Island Running Company's triathlon relay team at Team Mango's Captain Cook Challenge.  The name is pretty accurate as this race was quite the challenge.  We had many people question why we chose this race for our first one, but it was all for fun.  Special thanks to Mercedes DeCarli, Shirley Pratt and the Kiser family for letting me use their photos from the day for this post! (Also, if you haven't checked it out, Mercedes wrote a great article for West Hawaii Today last Friday on the 5k Fun Run and I think is also writing this Friday's article on the Captain Cook Challenge.)

The morning started off early with a pre-race briefing by Carl "Gecko" Koomoa at Kealakekua Bay.

About 30 of us got ready to tackle the crashing waves and swim from the side of the bay above to the Captain Cook Monument about 1 mile away on the other side of the bay.  It's pretty much at the end of the point in the picture below:


One of the hardest parts of the day was getting into the water.

We had to climb over rocks, scoot in on our butts and try not to get wiped out by the incoming waves.  Luckily we all made it in and were off.  After the initial swells, the water wasn't too rough.  There wasn't much to see underwater, though, since the ocean is pretty deep where we were.  But there were a pod of dolphins playing in the bay that we swam over about halfway across. I saw about 5 dolphins swim right underneath me, which was certainly a highlight of the day.

At the end of the swim, we climbed up a ladder to get to the Captain Cook Monument where the volunteer team had set up a transition area with our run shoes and gear.

I was one of the last people out of the water, so the transition area had cleared out quite a bit by the time I made it there.
After throwing on run shoes and some clothes, it was up a treacherous trail to the top of Napoopoo Road.  The route is approximately 2 miles, with 1500 feet of climbing.  And the footing is very rocky and loose, so that ended up being more of a hike than a run unfortunately. (Although for mountain goats like Billy Barnett, it was no big deal and he ended up setting the trail run record in 15:45.)

The picture below shows some of the trail, although not the steep portions, and a much better way to get to the top!
After what seemed like forever I finally made it to the top and tagged off to Jason who took off on the bike. Yes, for those who may have seen him or the pictures, that was Jason on a bike! He did pretty well, too, for that being his first time on a bike in 2012.

The bike course was 1 loop, from the top of Napoopoo Road south on the highway to the 160 junction to Honaunau, then north to Kealekua Bay, all the way up Napoopoo Road again to the top.  Then it was 3/4 of that loop again, stopping at Kealekeua Bay at the bottom of the hill.

The final transition area was back at Kealekekua Bay, as we headed back out on another run 2 miles south along the beach road and back. By the time we hit this part of the event, it was about 10 a.m., so the run was pretty toasty.  But there was a great aid station with icy cold water bottles at the turnaround.


Both Jason and I completed the last run portion, so we actually ended up with two relay teams.  Guess which one won. :) I started my run when Jason came into transition and Jason did his transition and some sort of crazy loser lap in his bike shoes before starting his run.  He caught me about 1 mile into the run.

Results for the individuals are here.  Relay results aren't included on that link, but the combo of Tai Scarbrough and Rob Van Geen finished in first place.  Jason running in our relay was second and my run from our relay was third.  Chris Prater and Kevin Prater combined to come in next followed by Dave and Shirley Pratt and then the Chris/Kevin/Becky Prater team.

All in all it was a great day, a beautiful and challenging course, and a fun way to do something different. Who knows whether we'll do another triathlon relay, but it was a great first experience.  Also, congrats to everyone who completed that course solo.  That is one tough race!

And as always, thanks to the volunteers who carried our gear around the course, set up aid stations for us, kept track of the timing and always gave us a smile and a cheer!

Please note there is no Peaman race this weekend (some calendars incorrectly have it on this Sunday).  The next Peaman is on Mother's Day, May 13.  It will be a 3/4 mile swim and 3.1 mile run.