This time of year seems to be a busy time on the Big Island for races. With the exception of next weekend, there is a race every weekend until the end of March. So after last weekend's Valentine's Day Race in Hilo, Jason and I were ready for Peaman's Terrific Turtle Trudge (332,640 inches), Mighty Mouse Scamper (126,720 inches), and Road Runner 1-mile Romp (63,360 inches) in Kona. We both ran the Terrific Turtle Trudge, which equates to 5.25 miles. I was very excited for this Peaman event because it gave me a little break from the swimming, which, as I've mentioned before, is not my strong suit! 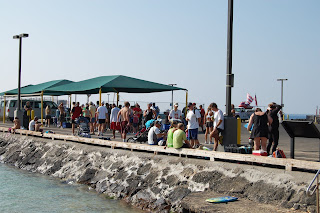 Luis DeLaTorre pulled away at the beginning of the race on his way to a winning time of 30:00. Following him was a pack of runners, including Jason, Bree Wee, Penn Henderson and Olympic Trials Qualifier Clara Peterson. Clara was in town with her husband and son for vacation, but still came out and supported the local race. She finished second overall and as the first female, with Jason, Bree and Penn following behind for the top five. (I was quite a way behind those leaders, but did manage to finish as the fourth female overall). After the race, Jason mentioned how amazed he was by Clara's closing speed in the final 800 meters. Best of luck to her as she continues to train for another Olympic Trials Qualifier in the 10-K, her specialty race.

Turnout for the races was exceptional, with over 170 people finishing one of the distances. Full race results are available here. There were plenty of moms and dads out pushing kids in jogging strollers and even a dog that finished the full 5.25 miles with its owners. It was great to see many familiar faces again, which seem to grow each time we go to these races.

Following the race, Peaman reached into his bag of tricks (or more accurately, his box of prizes) and passed out prizes to the drawing winners. No prizes for Jason or me this time around, though. 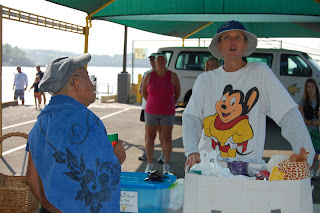 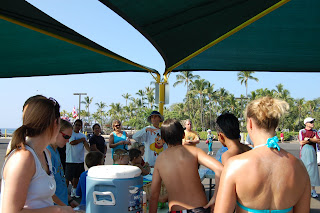 Next up on the calendar is another Peaman event in two weeks (March 7), the Zoomin Zak' Plunge and Plod Biathlon, which is another 1/2 mile swim and 3.9 mile run. The following week is the Run for Hops 5K/10K in connection with the Kona Brewers Festival on March 13 and the weekend after that is the Big Island International Marathon/Half Marathon/10K and 5K on March 21 in Hilo. Finally, the Lavaman Waikoloa Triathlon wraps up the racing month of March on March 28. 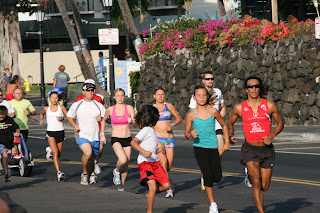 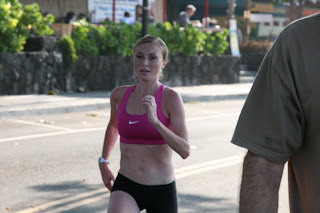 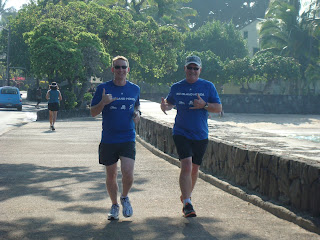 Big Island Honda Team
Posted by Melissa B at 3:03 PM No comments:

On February 14, while Jason and Melissa got to enjoy the warm weather in Hilo for a 5k, the other member of the Big Island Running Company's racing team, Erica, braved the unseasonable cold in Birmingham, Alabama for the Mercedes Half-Marathon. Undeterred by the cold, Erica was the winning female in a new PR and Alabama state record of 1:18:37 on a tough course! Full results of the race are here. Erica was running the race as part of her buildup to the 13th Annual Big Island International Marathon in Hilo on March 21. The coach of the BIRC racing team had this to say about Erica's run: "It was a great effort by Erica, but not a surprising result. Her training is going very well, and she's right on pace for a great run in Hilo. Jason better lay off the loco moco if he's going to be able to keep up with her."
In a Big Island Running Co. blog first, here's some video of Erica's run--look for the "Run Big" shirt (thanks to Ryan Speegle for the video):
Posted by Jason B. at 7:09 PM No comments:

So this post is a day late, but we hope everyone had a great Valentine's Day! For Valentine's Day, Jason and I headed over to Hilo to participate in Big Dog Production's Valentine's Day Run. Unfortunately, once over there, I realized the camera was out of batteries, so this post doesn't have any pictures. I will work on that in the future!

After a nice dinner out in Hilo on Saturday night, we got up early on Sunday morning to drive the first half of the Hilo marathon course to see what we'd be up against in a month. It's truly a beautiful course, through lots of lush forest areas. It was raining for a large portion of our drive, reminding us that, unlike all our sunny runs in Kona, there's a very real chance we'll be getting wet during the half marathon and marathon. But the good news is that the course appears to be mainly a slow gradual downhill. Of course, there are two killer hills stuck right in the middle, but the steady downhill afterwards should be a good reward.

Once we got back into Hilo, it was time to head to the Valentine's Day race, starting in Hilo Bayfront Park. The course ran the same 5K course that they will be using in connection with the Hilo marathon, although yesterday's course was about .1 mile longer (a nice surprise when comparing our times at the end). It was a nice course through Lilioukalani Gardens and around Banyan Drive. By then the rain had let up, so the weather was perfect.

Since it was a Valentine's Day race, Wayne "Big Dog" Joseph had several prize categories for couples including husband/wife, boyfriend/girlfriend, mother/son, and father/daughter. Jason and I were able to pull off the husband/wife win with our runs. It was close, though, with another husband/wife duo finishing just before me. Luckily Jason gave us some cushion. Big Dog has a full race recap, along with some photos, on his blog.

We had a great time talking to all of the runners at the event, but unfortunately had to leave pretty quickly to head back and open up the store. We're looking forward to spending more time in Hilo in connection with the marathon, including the chance to meet more fellow runners at the Hilo Marathon Expo on Saturday, March 20 at the Hilo Hawaiian Hotel.
Posted by Melissa B at 2:28 PM No comments:

Posted using ShareThis
Posted by Jason B. at 2:27 PM No comments: 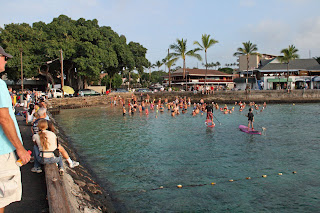 *Special thanks again to Jim Tilley for the great race photos!
Sunday, January 31 marked the first Peaman event of 2010 - the Splish Splash and Super Bowl Shuffle Biathlon. The swim was 1/2 mile and the run was 3.1 miles. My goal this time around was to do better on the swim than I did in December, since it was the same distance. The run was a little shorter, so I knew I wouldn't be able to make up as much time there. 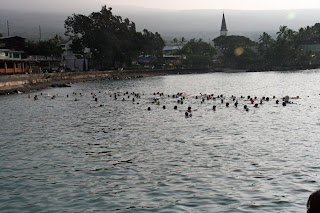 It seemed like quite a few more people were in town for this Peaman event, so the start of the swim was a little rough. I think I swallowed a couple gallons of salt water and at one point thought about throwing in the towel. I just couldn't get into a good breathing rhythm at all. But I stuck it out and eventually the crowd thinned out a bit. I made it out to the buoy in about 10 minutes and 30 seconds, much better than my usual times, but definitely on the slow side considering the leading swimmers finished the whole course in about 14 minutes. I think I also managed to swim a little straighter this time around, which I'm sure helped. I made it back to the pier right under 22 minutes, a couple minutes faster than last time. Success!

I ran up the stairs 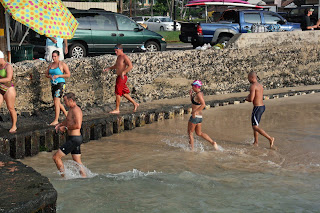 and tagged Jason who was running a relay leg off of my swim. He took off while I headed to get my shorts and shoes on. After about a minute or so, I was off on the run. I think that swim took a lot out of me, since the run definitely seemed much harder. I was still able to keep up a pretty good pace, though, finishing the run in just under 24 minutes for a total time of 47:01. I just wish I had known that only 2 more seconds faster and I would have been under 47 minutes! Jason must have been keeping better track of his time, though, because he just managed to squeeze our relay in under 41 minutes (at 40:58), putting us in fourth place. Full results are available here.

After the race, we hung out for the post-race festivities and chatted with the Big Island Honda Team, who had Korey Pulluaim completing the full event and Ray Whitford, Marty Barger, and Keola Wimbish running the 5K as a relay off of Korey's swim. All four finished with impressive times and are really getting into their racing season. 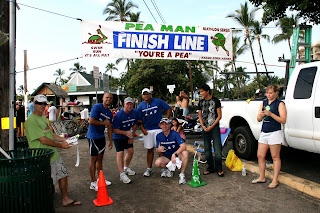 This event honored two new inductees to Peaman's Hall of Fame - Brown Bear Haspe and his late wife Sunny. Peaman made a touching tribute to the couple and illustrated how Sunny's attitude and spirit will continue on through the Peaman events and by recognition on the Peaman t-shirts. Peaman also introduced 2009's Peaman biathlon series points cham-peans Tom Finney and Kelsie Graboyes, who each competed in eight Peaman events in 2009. 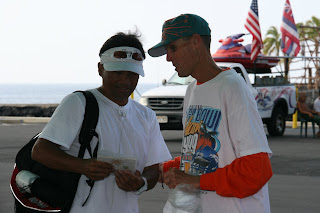 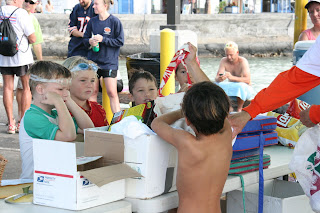 Following those recognitions, Peaman awarded raffle prizes from his big box of toys and goodies. I was lucky enough to win some swim goggles and Jason won a 2010 UH Calendar. It was a great event, as always. Next up is the Terrific Turtle Trudge, Mighty Mouse Scamper and Road Runner 1-Mile Romp on February 21. That one's only a run and I can definitely say I'm looking forward to a little break from the swimming!