In addition to the Volcano Rain Forest Runs on Saturday, there was also a Peaman event in Kona on Sunday. The Brown Bear Bash and Sunny Sprint was a relatively short 1/3 mile swim, followed by a 3.1 mile run.  A few people including Jason, John Ferdico, Ali Steiner, and Jason Shepard completed both a race on Saturday and the Peaman race on Sunday.  Unfortunately I had to do the timing for the Peaman race otherwise I would have done both as well - I love the ones that have a short swim!

Also, since I was timing and Jason was completing his first Peaman race, we didn't get any pictures.  But thanks to Kawika Singson who got some great water and finish line shots!

As I mentioned above, this race was Jason's first attempt at a Peaman swim/run event.  He's been working on his swim as a way to cross train lately and is definitely improving.  Of course, this event was also Luis De La Torre's return to Peaman races after a long layoff and he crushed the course, taking first place in a time of 24:55.  Marius Acker was second in 25:01 and Vaclav Seifert was third in 27:50.  Jason finished in fourth in 29:09, putting together a 19 minute 5k after his swim. Chris Prater was about thirty seconds behind Jason, followed only 3 seconds later by Mike DeCarli.

First place for the ladies was Rebecca McKee in 30:33. Alexandra Herd was second in 32:27.  Third place was essentially a tie with (mother and daughter?) Tessa and April Peerless crossing the line hand in hand in 34:51.

Full results from the race are available here.

After the race, prizes were raffled off, kids won toys, and the Perpetual Pea was passed along.  This month's recipients were the DeCarli family who make it to nearly every race with the whole family participating in one way or another - whether competing, volunteering, cheering or taking photos.

The next couple of weeks are a little quieter with no races going on in Kona.  If you're looking for a different type of workout activity up north, though, check out the Pololu Challenge this Sunday morning at 9:30 a.m. Details are below.

Yesterday we closed down the shop and headed over to Volcano for the 3rd Annual Volcano Art Center's Rain Forest Runs.  These races offered a half marathon, 10k and 5k through Volcano Village.  Since Volcano is up at elevation (approx. 4,000 feet), the temperatures are quite a bit cooler.  The weather forecasted 60 degrees at the start and that felt downright cold to all of us Kona folks. But luckily it was another perfect day in Volcano, with no rain, plenty of sun and a nice cool breeze.

Jason and Chico took some great pictures after the race was over, so you can check those out here.

Even though the weather was great, the half marathon course still provided plenty of challenges.  Rolling hills are scattered through the first 6.5-7 miles of the course and then you hit the killer hill.  This hill last more than a mile, but really feels like forever. But once you hit the top, you get to turn around and fly right back down it.  Then it's mostly downhill to the finish.

This run started off pretty much like a lot of Saturday mornings, with most of our Saturday morning run group racing (and wearing their Run Big! singlets).  I ran most of the race with Chitwin San Tun and Danny Jesser, finishing in 1:49:16, a time I was pretty happy with. Here are some photos of our training group and other Kona people finishing the race. (We missed one of our running group members, Don Kirby who just ran too darn fast for Jason to finish and get the camera before he came through - congrats to him for his age group win!)

While the half marathon was out running up the last hill on Wright Road, the 10k runners were doing their thing in the Village.  Chris Gregory took first place overall in a time of 36:25, followed by Stephen Hunter in 39:10 and Joe Barcia in 39:39.  For the women, it was Keri Ogden in first place in 42:56.  Noe Waller was second in 45:05 and Kerstin Busse was third in 46:34. Full results from the 10k are available here.

The biggest race of the day was actually the 5k, with 255 people finishing that distance.  The numbers were likely helped out by the Kea'au Cross Country team who came out and ran (and took home quite a few awards and apparently balloon art).

Todd Mahronic of Hilo was the overall winner of the 5k in 19:30.  Basil Schuerch of Bern, Switzerland was second in 20:08 and Jeffrey Ferrell of Hilo, Hawaii was third in 20:21.  For the women, it was Shayli Nakamoto of Kealakekua, Hawaii in first place in 22:31.  Lory Hunter (22:58) and Kaylee Rapozo (23:37), both from Hilo, were second and third place for the ladies.  Full results of the 5k are available here.

The event also hosted the ever-popular keiki runs, with distances of 100 yards and 200 yards. There were definitely some future running stars at the event! 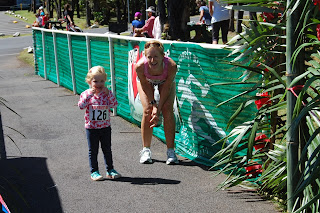 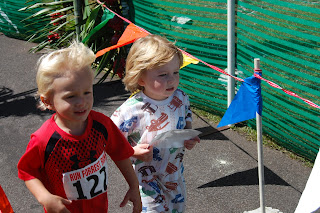 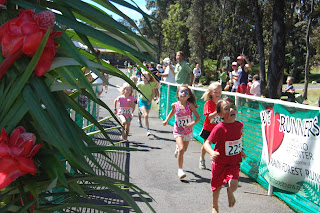 Congratulations to all of the finishers! And big mahalo to all of the volunteers and race director Sharron Faff for another great event!

After the race, we hurried back to Kona so we could be ready for the Peaman race this morning.  Results from that will be up tomorrow!

This past Saturday, the University of Hawaii at Hilo Cross Country team hosted a 5k run, with proceeds benefiting the program.  Almost 100 people came out to try their hand at the cross country course and to help support the UHH Vulcan team.  Results from the races are below.