With the Super Bowl one week away, yesterday Peaman held his event honoring the game. Although I would have been a little more excited about the Super Bowl if the Bears had defeated the hated Packers, at least the Peaman event was a fun time - and I didn't notice a Packers jersey all day, thank goodness!

The distance for this event was a 1/2 mile swim and a 3.1 mile run. And unlike last month, the ocean was very cooperative yesterday - clear and relatively calm. Which is good, because these events just keep growing, so there is plenty of chop and commotion at the beginning of the swim anyway! As usual, the top island swimmers took off and blazed the swim course. 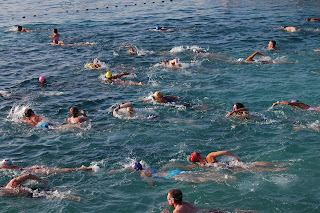 Chris Lieto, Bree Wee, Karlyn Pipes-Neilsen and the high school crew were some of the first out of the water and one to the run course. Chris managed to hold on to the lead and finish in 30:40, followed by Antonia Ferreira Da Silva Neto (31:03) and Matt Ward (32:25). Bree Wee finished in fourth and first for the ladies with a time of 33:04. 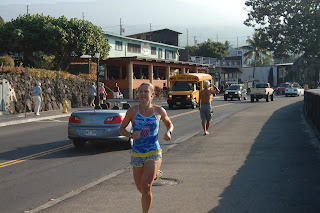 Second place female was Karlyn Pipes-Neilsen in 35:06, followed by Rani Tanimoto in 35:54. Full results from all the races are available here. As for me, I'm still slowed down by the swim, but cut 40 seconds off my last time at this distance to finish in 44:59. 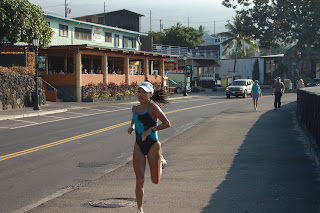 In the Peawee event, Chris Prater took first in 11:16, with Kaiden Lieto in second at 12:45 and Kakoa Kolman and Kanaipono Eckart tied for third in 13:40. For the female Peawees, I think it was Ryanne and Taylor Doherty coming in together at 13:50.

Here are some photos that our guest photograph Kyle Hammond snapped of the event. Mahalo to him for pitching in while Jason worked the timing machine. More photos are available here. 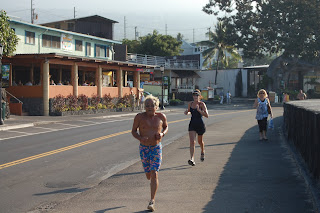 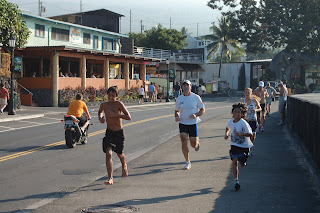 A crowd of runners pushing for the finish. 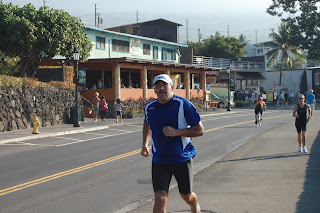 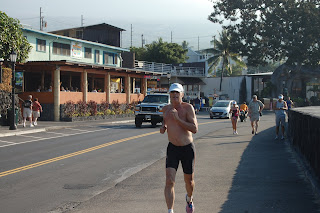 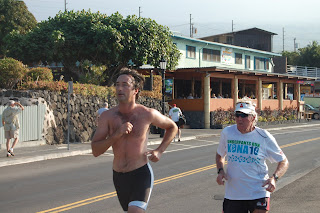 Looks like a good race between Sam Brown and Papa Pea.

This month we returned the Perpetual Pea and it was passed along to Peaman's father Papa Pea. He'll be undergoing shoulder surgery soon and we wish him the best of luck and a speedy recovery!

Up next weekend is Team Mango's springtime triathlon (1/2 mile swim, hilly 15 mile bike and hilly 6 mile run) on February 6 at 8 a.m. at the pier. On the Hilo side, it's Big Dog's Lover's 5K run/walk on Sunday, February 6 at 7:30 a.m. The race starts at Coconut Island in Hilo and is free, although a canned good donation is requested for the Hawaii Island Food Basket.

Go Steelers!
Posted by Melissa B at 2:45 PM No comments: 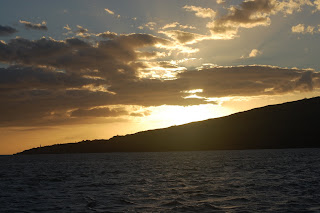 Last weekend was one of several marathon/half marathon races being held in Maui in January/February. While Jason participated in the Run for the Whales last year, this year it was my turn to head over for a race. After hearing Jason's race report on the hilly Run for Whales, I opted for the Maui Oceanfront Half. Several years ago, Jason and I ran this 15K when it was the Maui Surf 'N' Sand race. That race was perfectly flat, and so was this year's race.

With several distances to choose from (marathon, half marathon, 15K and 5K), this race could have gotten really confusing, but everything seemed to go smoothly. The marathon started at 5:45 am in Wailea and ran up the west side of Maui to the finish line in Lahaina. The half marathon started an hour later in Lahaina and was an out-and-back course. The 15K and 5Ks started 15K and 5K south of Lahaina respectively and ran straight to the finish line. All of the courses ran along the scenic coast, right between the West Maui Mountains and the ocean. Although I didn't see any, I talked to people who actually saw whales breaching during the race!

It was great weather for a race, fairly cool at the start and warming up once the sun came up. Although I had trained fairly hard for the race, an unfortunate bug hit me on Wednesday before the race, so I knew I would not be running as fast as I had hoped. I started the race trying to hit an 8 minute pace. Things were going ok, but once I hit the 5k aid station I had a coughing fit and realized even an 8 minute pace was not going to happen that day. So, I hung out for a couple of minutes and met up with one of our running group members, Megan Livingston, who was also doing the race. She was hoping to beat her time from the Kona Half Marathon and I decided to run with her. Although we've trained together and done most of our long runs together, running a race with someone is totally different, because you're never exactly sure what their race strategy is going to be. While I usually am the one being passed at the end, Megan made it her goal to pass people the whole way back. So we ended up with a pretty big negative split for the race. With about 3/4 of a mile to go, I knew Megan was going to hit her goal, so I told her to go for it. She pulled away and finished in 1:53:10, about a 2-minute PR! I was a little bit back in 1:53:43. That was a great way to run the race and not feel like I was dying at the end (except for the whole coughing thing). Congrats to Megan! 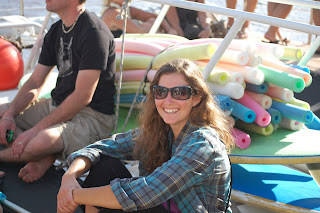 Megan is all smiles after the race.
There were a couple of other local Kona runners over for the race. Bree Wee came in first overall for the women's half marathon with a time of 1:24:29. Jano Soto was close behind in 1:28:59. Sarah Boretz ran her first half marathon in 2:15:58, with the help of Chanda Zavodny who finished one second ahead of her. Jano's wife Paola Soto ran her first full marathon in a time of 4:32:05. It was a great showing for Kona! Full results from the races are here. 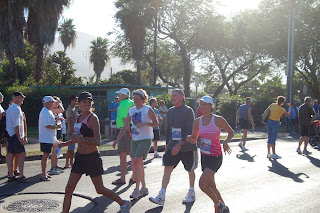 Sarah and Chanda finish the half marathon.
Another special runner in the races was my mom! Over the last month she's been motivated by some friends who are on the Biggest Loser (Courtney and Marci, if you happen to watch the show), so she signed up for the 5K at the last minute. Despite not having a ton of training, she finished the race with a great time of 41:34! Her next goal is to bring that time down in Kona in June. Congrats Mom - I'm very proud of you. That's her below, enjoying her celebratory beer. 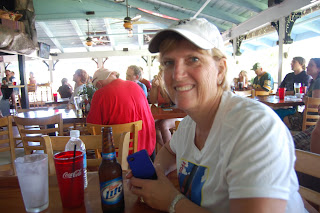 Later that afternoon, we recovered by taking a whale watch. We saw some great activity early on with a mother whale trying to teach her baby how to breach. I don't think the baby was quite getting the hang of it yet, but it was fun to watch. I didn't get any pictures of the baby breaching, but I got some good pics of the fin slaps and a tail. 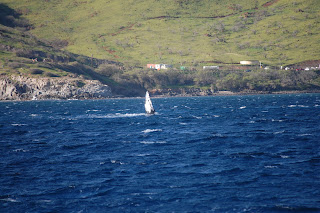 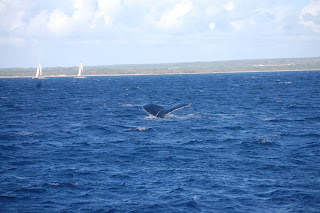 The next morning it was up again for another walk along the beach before heading back to the Big Island. It was a great trip, and I'd definitely recommend that race for next year! 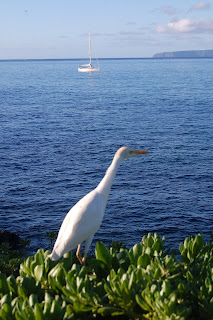 Tomorrow is the next Peaman race - the Splish-Splash and Super Bowl Shuffle Biathlon. It's a 1/2 mile swim followed by a 3.1 mile run, starting at 8 a.m. at the pier. We hope to see everyone out there for some free fun!
Posted by Melissa B at 8:46 PM No comments: 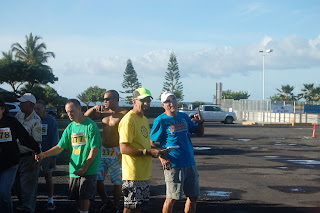 This past weekend we had the opportunity to participate in an inaugural event on the Big Island - the Hawaii Island United Way Resolution Runs/Walks. These 5k events were hosted by the Big Island Road Runners and held simultaneously in Hilo and in Kona. They were made possible by the generous donations of HELCO. Approximately 50 people participated in the Hilo race and 75 in the Kona race (including Jason and I).

The Hilo race was held on the Bayfront course used for many 5k races. Results from the Hilo race are available at Wayne "Big Dog" Joseph's blog.

The Kona race was a new course out at the Old Airport. It was a nice, completely flat course. I haven't been able to locate any results from the Kona race, but I do know that Jason had a tough race with an out-of-state runner before managing to break away for the win. In the women's race, it was a battle between me, Renee Wilson and another runner, with Renee coming in just behind me and then the unknown runner.

But the real story of the day were the number of people, at least in Kona, who just came out to show their support and either walk or run. There were many new faces at this race and we hope they all keep coming out and staying active! Of course, there were some usual suspects, too, including Jon Kunitake and Lori Montgomery, below. 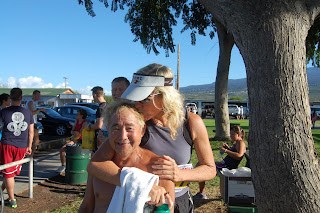 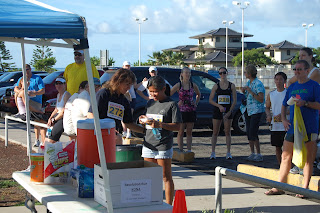 Congratulations to all of the runners and walkers! We look forward to seeing this event grow next year!
Posted by Melissa B at 6:18 PM 2 comments:

We hope everyone had safe, healthy New Years' celebrations and that those New Year's Resolutions are still going strong! Between end-of-the-year inventory and 2011's first cold, we haven't yet posted info on the New Year's Day run that we did in Hilo. After a relatively early night on New Year's Eve, we headed over to Hilo on New Year's Day for Big Dog's Resolution Run 5K at Coconut Island. The race started at 9 a.m., so we didn't have to get up too early, but it also made for a little bit hotter of a race. Since we were both running, we didn't manage to get any photos, but Big Dog has a nice race recap and some photos over at his blog. Full race results are also here.

Coming up this weekend are the Hawaii Island United Way Resolution 5k Runs/Walks presented by the Big Island Road Runners. These events are being held in both Hilo and Kona at 8 a.m. on Saturday, January 8. Registration forms are available at Big Island Running Company and entry fees are $35. It's a great way to keep going on those New Year's exercise resolutions!
Posted by Melissa B at 12:59 PM No comments: