Another sunny Sunday for a Peaman race, which was appropriate, since the race honored Brown Bear and his late wife Sunny. The course for this race was a 1/3 mile swim, with a 3.1 mile run. 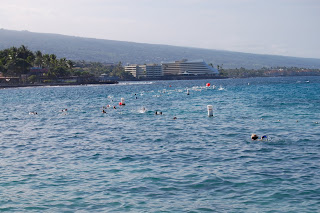 Before the race, I was excited to have such a short swim this time. After the swim, I was thrilled, because the chop in the water was awful! I was never really able to get in a good rhythm, so I was definitely happy to be done. The leaders looked like they had no problem, though. Below it looks like Luis is battling Hannah out of the water. 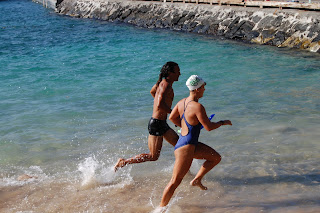 The usual suspects were all out at the race, including lots of keiki. It's great to see all of them out running hard. I'm sure the group below was pushing each other to the finish (and having fun while doing it)! 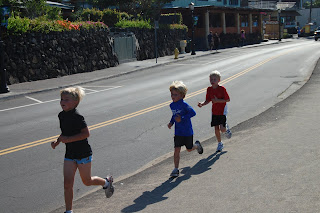 In the men's race, Luis De La Torre came in first at 25:06, followed closely behind by Sam Corace (below) in 26:11. You can tell Sam is getting into top racing form and is going to give Luis some real competition in the coming months. 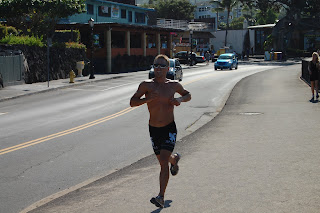 For the ladies, it was Rani Tanimoto finishing first (and fifth overall) in 28:19, with Dana Drexler coming in second in 31:52.

It was also a big day for the Big Island Honda Crew, who apparently all set PRs in yesterday's race. Korey Pulluiam finished the swim/run in 32:56; Keola Wimbish finished in 52:44; and Korey's relay with Ray Whitford finished in 29:12. Those guys have all been training hard and it's definitely paying off. 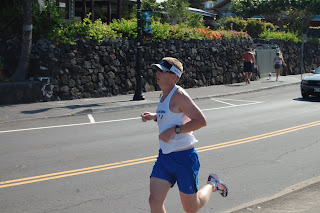 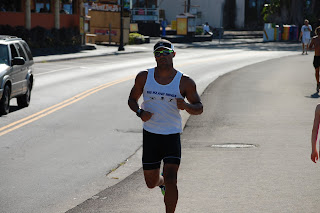 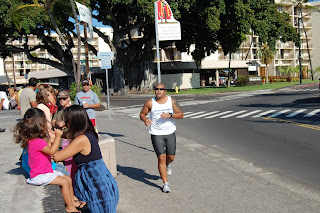 Once I coughed up all the salt water I swallowed on the swim, I was able to pull together a pretty good run. Of course, a lot of that was due to Sam Brown, who ran with me the last half of the run and kept encouraging me to keep up the pace and pass people. You can see him right behind me in the picture below. Thanks to him I finished in 20th place in 35:15. Mahalo, Sam! 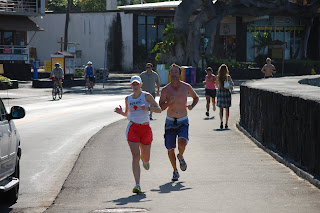 A lot of our running group members and friends also had nice races. Some of their finishing photos are below. Full results from the race are here and more pictures are here. 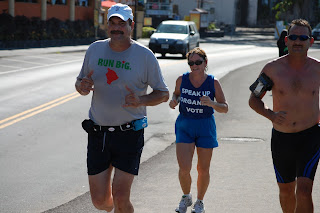 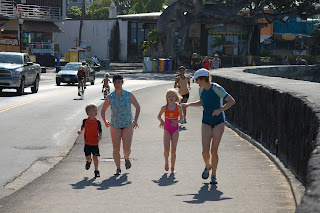 Birthday girl Kerry Hull (on right), with her kids Lauren and Evan and friend Michelle 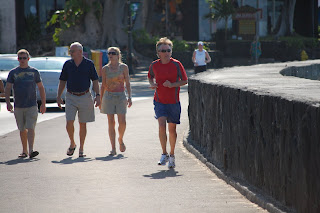 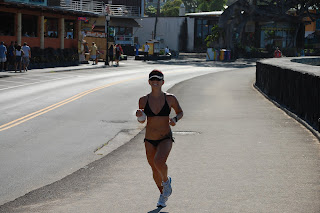 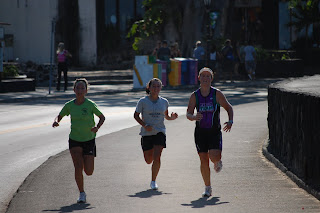 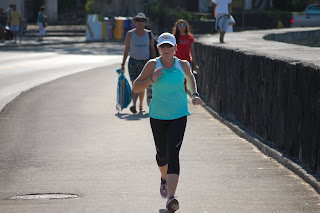 Lisa Bryant completed the run as part of a relay with her daughter Marissa doing the swim.
After the run, the keiki got some beach time in with Bree Wee (who only completed the swim portion of the event as she gets ready for Ironman Louisville). 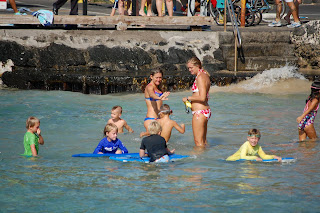 The post-race fun also included the usual prize giveaways for kids and adults alike by Peaman himself. The perpetual pea was also award to Luis De La Torre for all his great accomplishments and assistance over the years. Thanks again to Peaman and all of the volunteers who made this another great event! 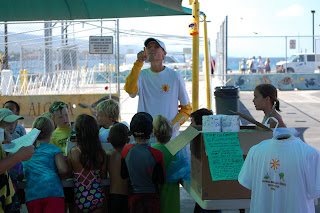 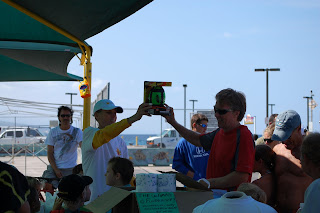 Up next weekend are the Volcano Art Center Rainforest Runs in Volcano. Jason and I will be heading over there and running the half marathon on Saturday. We'll also be following it up with Big Dog's Sports Hall of Fame 5k on Sunday. Should be a fun, exhausting weekend. (Note that the Big Island Running Company will be closing early on Friday (3 p.m.) and will be closed Saturday and Sunday.)
Posted by Melissa B at 4:41 PM