Mahalo again to everyone who came out to the Wobble & Gobble on Thanksgiving morning (and especially to those who volunteered and helped us out)! We had a great turnout, with Jason taking first place for the men in the 6.4-mile race and Ali Herd finishing in first place for the ladies. In the 3.5-mile race, it was Ray Whitford with the win and Brooke Myers coming in second (and first place for the women). The 1-mile race set some records with Toby Olney breaking the old course record by 3 seconds with a time of 6 minutes and 7 seconds. Silas Wiley also broke his own keiki course record with a time of 7:45. Lori Montgomery took the victory for the ladies in the 1-mile course.

If you weren't able to work off your Thanksgiving calories ahead of time, Peaman offered an event yesterday to help work them off after the fact. The Post Pigout Peamania was a crazy event that offered lots of different options for swimmers and runners. The full event featured a 1/4 mi. swim followed by a 2 mile run and then repeated! There were also variations on that event, with people only swimming, only doing one lap, or doing the shorter Peawee course (once or twice). There were also relay teams that had one person do the swim portion twice and another person do the run twice, while other teams opted to have one person do the whole first lap and another person do the second lap. While it sounds like it would be mass confusion, it was actually pretty smooth. 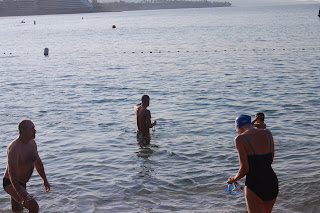 Chris Lieto even came out to join in the fun! (That's him in the middle, with his son.)

I decided to do the full swim/run/swim/run and had no idea how it would turn out. For the first lap, the swim was pretty crowded, but that really helped pull me along. Then came the first run, which also wasn't too bad. The first run went down Alii Drive to Kona Reef and then turned right before heading back in front of Royal Kona and Huggo's. I managed to pass a couple of people on the run, but then of course we had to get back into the water. Where those same people went ahead and passed me again! The second lap was much tougher. I felt like I wasn't going anywhere on the swim (but it did feel nice to jump in the water after the run)! The second swim ended up being about 20-30 seconds slower than my first swim. After getting out of the water the second time, I was definitely feeling some dizzying effects. After quickly throwing on some shoes, though, I was back out on the run, which this time went past Huggo's and Royal Kona first before turning left to Alii Drive and back to the finish. Another good run and my total time for the event was 45:58, which managed to put me in third place for the ladies (but still 5-6 minutes back of the first two)!

No surprise here, but Chris Lieto took the overall victory in a time of 35:09, followed by Tai Scarborough in 37:47 and Geoff Whitener in 39:13. Coming in fourth - and first overall for the women) was Rani Tanimoto in 39:29. Karlyn Pipes-Neilsen was the second place woman with a time of 40:34. Full results from the races are here.

I wasn't able to get any pictures of the early racers, since I was out on the course. And Jason (our usual Peaman cameraman) had a very important job, too. He was the timer for the race! 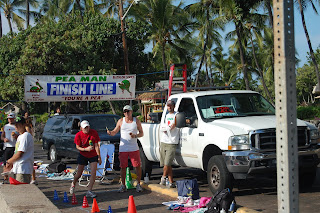 I definitely think he (and the popsicle stick hander-outers) had the hardest job keeping track of all the different finishers.

After I finished, I did manage to get some good shots of some other finishers, though: 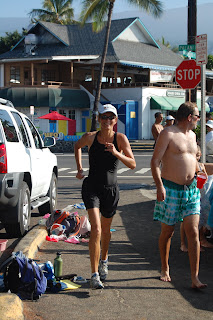 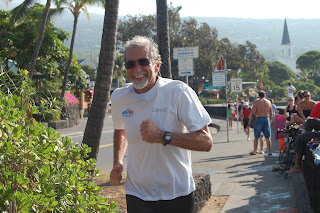 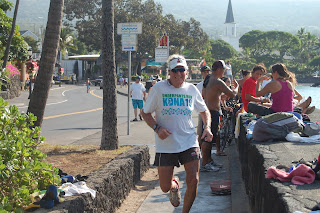 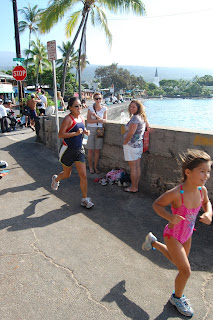 Nori Becker chasing down daughter Makena (who did the entire course)! 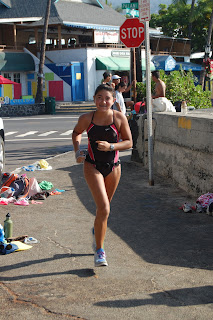 Marissa Bryant-Manago also did the full course and finished strong!

Mahalo as always to Peaman and his crew of volunteers who helped make yesterday's event a great post-Thanksgiving workout!

No races are coming up on the Big Island in the next couple of weeks, with the next race being the 6th Annual Jingle Bell Beach Run 5k on December 19. However, the Honolulu Marathon is coming fast on December 12, so good luck to everyone running that. Enjoy your taper!