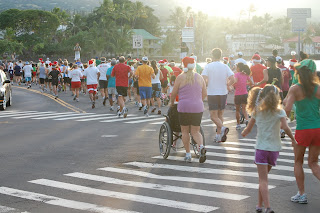 The 2010 Jingle Bell Run was a fantastic way to celebrate the holidays and cap off an active and fun year (although it's really not over, since there's one more Peaman event next week)! The race was also the goal race for our Couch to 5K Program!

This race, like most others in Kona, was a laid-back, free, fun event with a 5k race, as well as a 1-mile distance. Hosted by Rani "The Roadrunner" Tanimoto-Henderson and her many volunteers, the event ran from the pier, south on Alii Drive. The 1-mile turnaround was at Bubba Gump's, while the 3.1 mile turnaround was near the Green Flash (partially up hill #2 on Alii Drive).

Everyone was encouraged to dress up for the holidays and many people took that to heart. There were tons of Santa hats and reindeer antlers and noses. Here are some photos of the day and the various costumes. More photos can be found here. 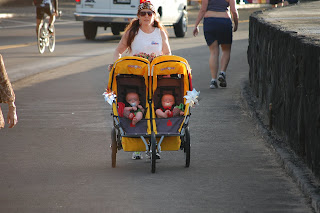 I don't think you can really tell in this picture, but the babies had on Christmas outfits with striped socks! 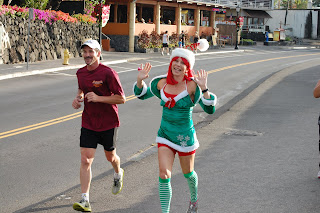 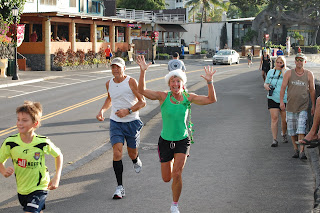 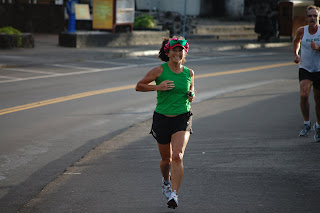 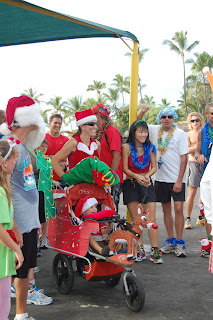 Ms. Claus with the sleigh and reindeer won first place in the costume contest. 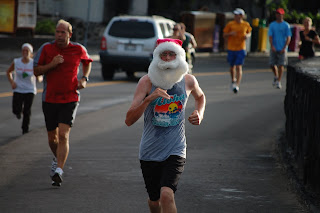 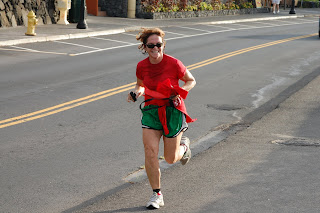 And here are some pictures of our amazing Couch to 5k Group - most of them plan on continuing on and training for other races! 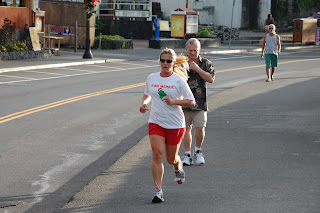 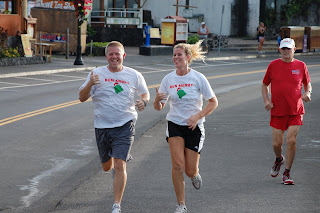 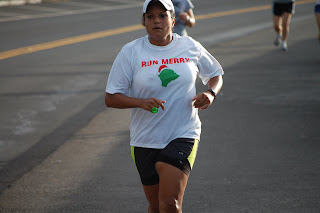 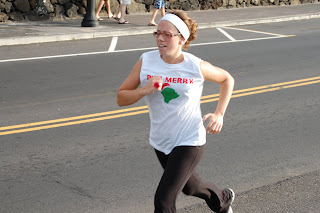 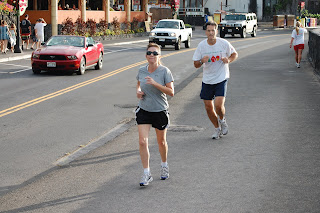 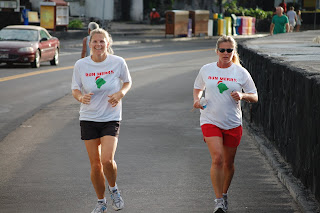 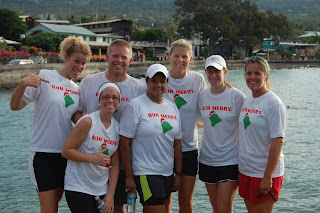 The post-race was when the event really got going. I don't know how she did it, but Rani had tons of great prizes to give away - coffee, Starbucks schwag, snorkel cruises, restaurant gift certificates, massages and more! The first prizes went to the costume winners, with the sleigh and reindeer coming in first, Tasha the reindog in second and the guy in the Santa Claus beard in third.

Rani then dedicated the Special Recognition Award to a truly deserving individual - Peaman. The time and effort that he puts in to planning monthly free events is astounding. And he's been doing it for twenty years - through various health ups and downs as well. Mahalo plenty to Peaman for everything he's done for the community! 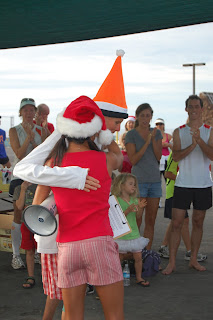 The surprise award of the day for us was the Community Member award. Rani started talking about the recipients of the award and it was like one of those new CFL lightbulbs going off (you know the ones - they need some time to warm up). Slowly I started to realize that she was talking about Jason and I! We want to thank everyone who has supported us over the past year+. We love being a part of this community and truly enjoy all the events that we get to attend, race, volunteer at, etc. Thank you all for being so welcoming!

The next awards were for the outstanding participants in the Couch to 5k program. While everyone that participated in the program did a great job, these two stood out. Matt Sutherland made it to all but one of our group runs, even when he was the only one with our leader, Maggie. And Michelle Heid battled some injury issues when she first started, but by the end of the program she was running extra days on her own. Congratulations to them! 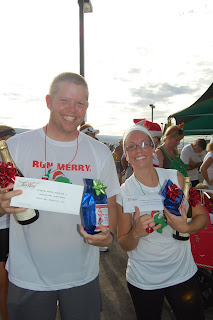 We'd also like to thank Maggie Leite for all she did to keep everyone motivated and ready to run. She was the perfect group leader! I know many of the participants want to keep training because of her.

Congratulations to all of the finishers and many mahalos to Rani for putting on such a great event! Next weekend is the last Peaman event of the year - Peaman's Birthday Bonanza, a 1/2 mile swim and 3.9 mile run. Mele Kalikimaka!