Running Big in the Big Easy

[Editor's Note: This post was authored by Whitney, a friend of Big Island Running Company who ran New Orleans' Rock 'n Roll Half Marathon on February 13, 2011.]


When you plan on a road trip to New Orleans, LA, Bourbon Street, hurricane drinks, and beads typically come to mind. While all of these are some of my favorite past times in the Crescent City, I traveled to NOLA for a different activity, the Rock ‘n Roll Half Marathon. This was my second Rock ‘n Roll series race and I had chosen this one for several reasons, the main being the flat and fast course I knew the city streets would provide.

Since this was only my second big race and I was looking to improve my previous time, I had Erica make out a schedule that would better prepare me for Big Easy running. I more or less stuck to the weekly routines and the oh-so-fun early weekend long runs, thanks to Erica’s “coaching”. With only a couple minor speed bump injuries, race weekend came and I felt prepared. I road tripped down with a group of girls that so graciously agreed to be my cheering section. I’ve realized that having someone there to cheer you on and pump you up is vital for me in a race so thanks to them, they made the weekend loads more fun!

Since the race wasn’t until Sunday, we had all day Saturday to roam the French Quarter and take in the city’s sights. I took a run around Audubon Park in the Garden District with my friend Nicki, and fellow Rock ‘n Roll runner. Since NOLA is famous for its amazing food, we gorged ourselves on a good ol’ fashioned po’ boy. This picture may not seem appetizing for some, but it definitely hit the spot! Fried green tomatoes—yum yum! 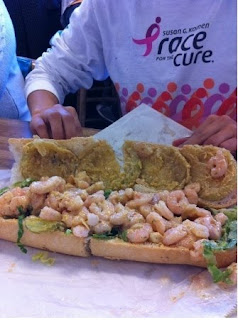 The temperature the morning of the race started off in the low 40’s so getting to the start wasn’t so fun. After wishing Nicki good luck on her first half and departing to find my corral, I made some friends in the oh-so-dreaded restroom line. This couple was running the full so we briefly chatted about the race and they advised me to watch out for any potholes in streets--I’ll pass on a sprained ankle thanks! The husband was so kind to give me one of his pace time cards he had laminated for his group that was set for an 8:35/mile which is what I was striving for. I was super pumped about the time card since I didn’t have Erica with me and her trusty GPS watch (I really need to invest in one!). 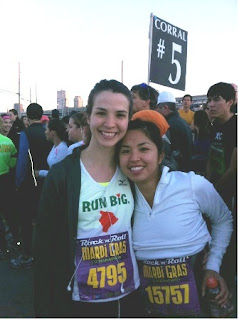 7:00 AM came and we were off! I was lucky enough to be in the front of my corral, which helped me to come fast off the start feeling like I was already a winner. J The course started in the lower Warehouse/Garden District and took us on a beautiful tour of Victorian Mansions, overgrown live oak trees, and street-car lined roads. We wound our way through the area until about mile 8. The full marathon runners split off from the half around mile 5 and continued Uptown toward the Audubon Park. As for my cheering section, we had originally planned for the girls to be at mile 3 then hop up two blocks for mile 7. Well, as New Orleans streets are impossible to navigate quickly and thanks to several road closures, the girls finally managed to squeeze into a spot after mile 4. These girls rock because they woke up extra early to have a poster party to show their support! I knew I needed to be looking for neon signs and finally saw them as they stared into the sun searching for me. Only until I was about 10 feet away did they see me but they definitely showed some love. 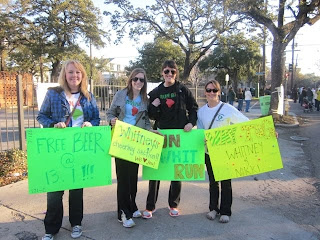 I was feeling pretty good about my pace and was actually ahead of my time card through the first half. I saw the girls again after mile marker 7— 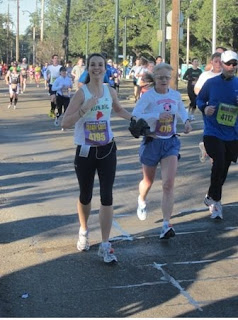 -then the course began to wind back to the French Quarter. Thankfully it does not take you straight down Bourbon Street, because I’m not sure if I could stomach the previous night’s lingering aromas. Once we passed the French Market it was time to turn up Esplanade and finish the last 3 miles into the City Park. This was the only part of the course I did not love because of the gravel they had put on the road to fill in some of the holes and cracks which made footing tricky at the end. Since around mile 2.5 I had been keeping pace with another girl and at the end it paid off to have someone push you a little extra towards the end. I crossed the finish line at 1:50:56, ten minutes faster than my first half marathon! I was pretty proud to increase my time by several minutes and felt that for the next race I would know where to push a little harder along the course.

My cheering section appeared at the finish and captured some photos of me shuffling through the food and drink lines. Group photos ensued and I must say we may make “Run Big” look pretty good. 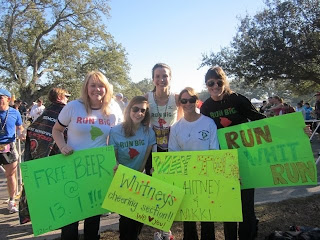 NOLA was a great race and I think if I ever get the courage to do a full, this will be the place. You couldn’t beat the weather and the course was awesome. My only complaint to the Rock ‘n Roll series coordinators: PLEASE schedule the next race for Saturday morning instead of Sunday, as my sobriety on Bourbon Street does not appreciate such taunting.