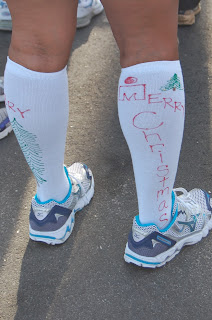 It's Christmas time! Last Sunday was the 7th Annual Jingle Bell Beach Run on Alii Drive in Kona.  Yet another one of the free races in Kona, this one is hosted by Rani Tanimoto and Penn Henderson and is truly a first class event.  And it's growing by leaps and bounds each year.  This year there were over 300 finishers between the 5k and the 1-mile distance!

The holiday spirit at this event is simply amazing.  Everyone starts stalking the Christmas aisles before the race to come up with the most inventive and festive attire.  It's a bonus if it's not too uncomfortable to run in! Here are some of the festive outfits: 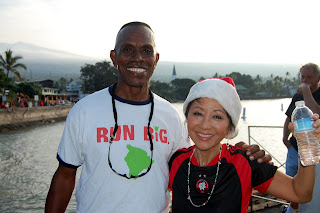 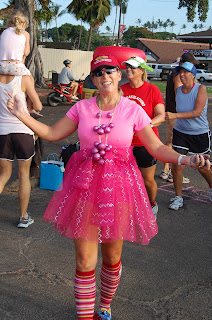 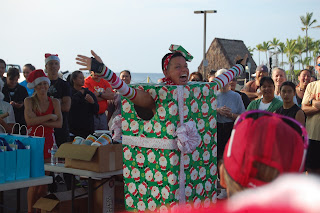 Mrs. Claus and some holiday roller skaters were there, but we didn't get any pictures of them. Below are the participants in the costume contest.  The wrapped present (on roller blades, too!) won first place, followed by skinny Santa and the sparkly elves. 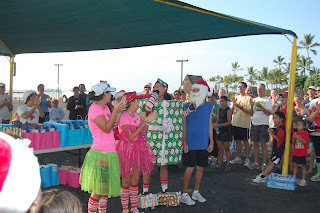 Another highlight of this race is the fact that it's the culmination of our Couch to 5k program! Our Couch to 5kers have been training three times a week since the middle of October to run this race.  Most of them started out with no running experience at all, but look how they did!

We didn't get pictures of Dominique Leite or Laury Saracho, who also finished the race.  And Paula Baker also completed the program, but had to help out with Team Mango's Journey to La-La-Land.  Rani also prepared awards for a couple of our outstanding Couch to 5kers - Laura Kniffin who really started with no running experience and Maggie Leite who has been the awesome coach of our program for the past two years!

Congratulations to all of our Couch to 5k Finishers and we hope we continue to see you out on the roads!

Rani and Penn do an amazing job of pulling together prize packages for this event.  In addition to the ones they make for our Couch to 5k group and the top five finishers of each race, they also have a Special Recognition Award and a Community Service Award. This year the Special Recognition Award went to Carl "Gecko" Koomoa, the head of Team Mango Races, another group that puts on races over the course of the year.  Unfortunately, Carl wasn't able to make the Jingle Bell Beach Run because he was hosting a Team Mango event - Journey to La-La-Land, a run or bike to the top of Hualalai!The Community Service Award this year was present to Daniel Hodel, whose Queen K Tri Club hosts several aid-station assisted training runs/races each year.  Congratulations, Daniel and Gecko!
As for the race results, Jason came in first for the 5k with a time of 17:46, followed by Travis Thompson in 18:14, Brandt Mabuni in 18:21, Brad Bryson in 18:28, and Tai Scarbrough in 18:33.  For the ladies 5k, it was Karlyn Pipes-Neilsen with the win in 20:36.  Grace Howard took second with 21:49, followed by Brooke Myers with Whistler (in a speedy jogging stroller) in 21:57, Anita Leao in 22:16 and Cassidy Landes in 24:11.

In the 1-mile run, Tobey Olney followed up his Wobble & Gobble one-mile victory with a time of 5:52 for 1st place.  Cade Kanuha was second in 8:42. Jackie Payne followed in third place and first overall for the ladies in 9:01.  Amanda Schiff was hot on her heels, coming across next in 9:02. Rudolph the Reindeer and Santa's Elf came in third and fourth for the men, while Johnny Prehn and Apryl Sasaki were third and fourth for the women.

Full results from the races are available here.

Even after all of these awards, the fun still wasn't over - there were tons of random prize giveaways, including a night's stay at the Royal Kona Resort.  As I mentioned above, Rani and Penn have really created a special event.  Thanks to them for their generosity in organizing this event and also to the sponsors who help make it possible!

Up this weekend is Peaman's Birthday Bonanza on Christmas morning.  8:03 a.m. at the Kailua Pier.  We hope to see everyone there after all the presents have been opened!
Posted by Melissa B at 2:41 PM