This past Sunday, Team Mango hosted its second annual Monster and Mini-Monster triathlons.  These races aren't for the untrained, since the Mini-Monster is a 1.2 mile swim, 56 mile bike and 13.1 mile run.  The Monster race is twice that distance.  But there are always plenty of people in Kona in good enough shape to complete either race.  And this year there were even several participants from the mainland, including a group from Canada! It's a great chance to complete a triathlon on part of the famed Ironman World Championships course, without having to qualify or pay a hefty entry fee.  Entry fee for this scaled-down race was only $68!

The event started at 7 a.m. at the Kona Pier with a swim out to the King's Buoy, .6 miles away.  Upon returning to the pier, the Monster participants had to jump right back in and swim another loop of the same course for their 2.4 mile swim.  In the meantime, the Mini-Monster participants were jumping on their bikes for a ride out to Waikoloa. Although we had been having some relatively cool weather last week, the day of the race was clear, sunny and quite a bit warmer.  I'm not sure that all of the athletes appreciated that - although I hear the wind on the bike course was not too bad by Queen K standards.

I was able to make it back down to the pier in time to catch some Mini-Monster participants coming into their bike-to-run transition, although I wasn't able to catch up with the Mini-Monster's eventual winner Thomas Vonach, since he was moving way too fast all day. Congrats to him on a great race!

But I was able to see the women's Mini-Monster winner Andrea Bess: 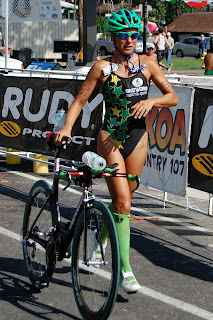 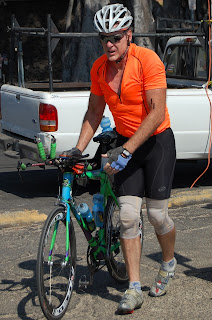 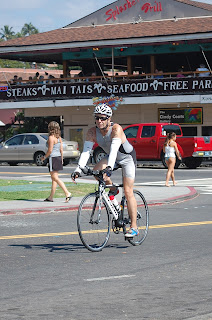 and several others coming in from the first 3-mile loop of their run.

From there we headed to the aid station out at the Old Airport to visit with the support crew out there and get an update on some participants.  I didn't snap any pictures out there, but it was definitely hot and sunny.  After a cruise down Alii Drive, the next stop was the aid station at Lyman's manned by the Prater family. 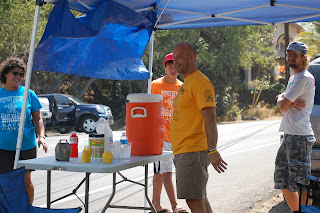 They had a very smooth operation at work there.


And we were able to see a few more friends come through this portion of the run course.

Some additional pictures are available here.

Although we missed the finish line, full results are available here.  Congratulations to Thomas Vonach and Andrea Bess for their first place finishes in the Mini-Monster.  Also huge congratulations to Daniel Brandis, Laurie Beers, Eddie Kanai and Caleb Westfall who completed the full Monster event.  Although this race is the same distance as an Ironman, the conditions are certainly different and more difficult without nearly as much crowd support.  But they are obviously all tough!  And mahalo to all the volunteers who worked the aid stations throughout the day and provided encouragement to all the athletes.

Congratulations to Team Mango, Carl and Paula for putting on such a first-class event with tons of heart! There's nothing like having the race director personally delivering pizza to the volunteers throughout the day. Thanks for all you do!