This post was written by our employee John Ferdico about his race last weekend at the Hilo to Volcano Relay. Full results from the race are available on the Big Island Road Runners' website.

Preoccupied by his Honu training, this year Jason chose not to assemble a relay team for the Hilo To Volcano 50K relay, put on by the Big Island Road Runners last Saturday.  In his place, I decided to jump in and throw together a Big Island Running Company team.

Compared to Jason's past squads we looked...well...older.  Joining me was Orestes "Chico" Barrios, and Ellis Andrews, for a combined team age of 175 or thereabouts.  No matter, we joined the fray in the Men's Masters Division, and piled in the truck at 4:00AM Saturday morning for a ride over the Saddle.

With the constitution of a warrior, Ellis volunteered for the second leg, which Jason warned us had the worst hill climbs. Chico-- legendary for his blazing starts-- was the obvious choice to kick off the race, which left me the anchor slot.  I was a little worried about stiffening up for the crucial finishing leg, but I figured everyone in the Masters Division would be subject to the same treachery of old, old hamstrings.

We arrived to send off the solo 50K runners with a cheer of enthusiasm, respect, and a little incredulity, at least on my part. Volcano seemed like a long way away.

Soon after, Chico and the rest of the relay starters were off.  Due to a week of the flu, Chico lacked a little of his reckless enthusiasm, but as we passed him in the truck on the way to the first relay point, he was running right along with a speedy youngster named Carmen Garson-Shumway.

At the handoff  was a bit of a traffic jam, as the relay runners had not yet separated much.  Among us were several Big Island race regulars, including Chris Gregory and Heather and Tai Scarbrough.  We knew we wouldn't be seeing  much of them after long, and focused more on the teams that ran less like cheetahs with their fur on fire. 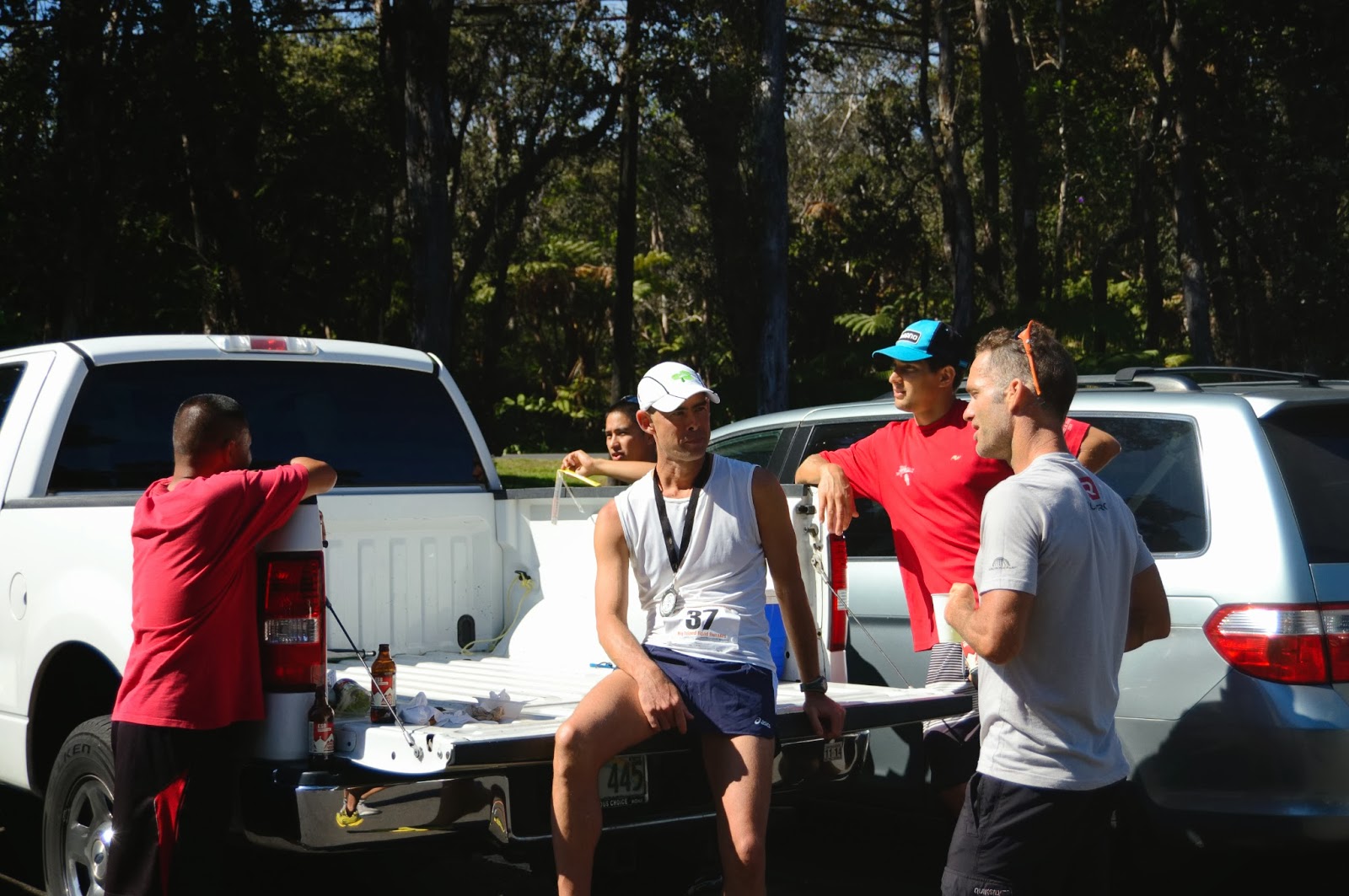 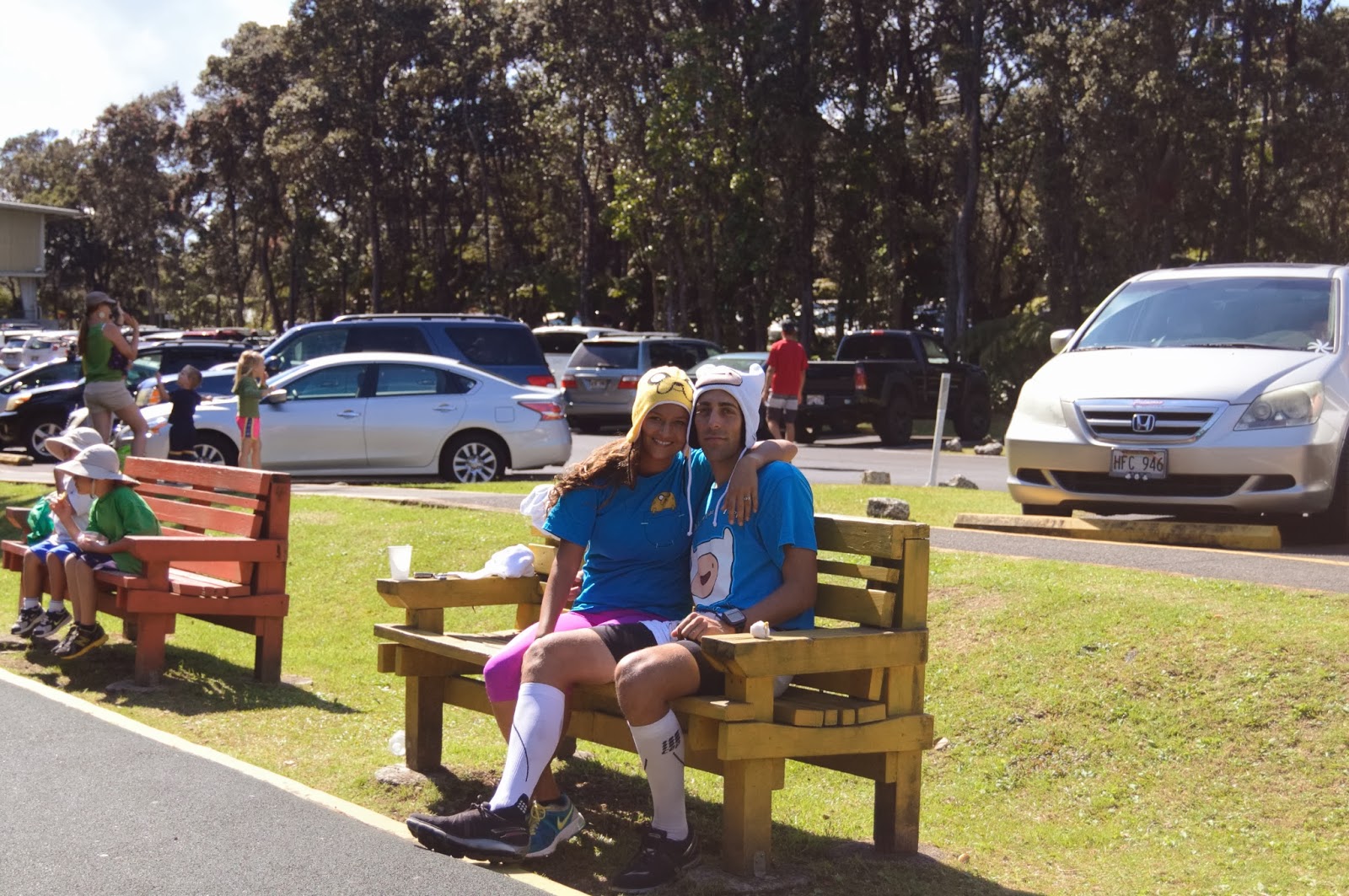 Ellis was off next, just behind Carmen's teammate Noe Waller.  Ellis lived up to his world-class reputation, coming into the second relay point right next to Noe.

And so I was off, step for step with Noe's teammate Mehana Sabado-Halpern.  We were still in the flats outside of Hilo when I glanced at my watch; Mehana was dragging me along at a 6:50 pace.  I was sure this would kill me, but my teammates ran in right next to hers. No way I wasn't doing the same.  So, an alarmingly short time later, I finished my first 2-mile stint and tagged off to Chico.
Chico ran another solid leg, giving up just a few seconds to Carmen. Ellis rushed out with a mind to show Noe who was  boss.  And he did show her, in that second leg, when the long, unrelenting climb to Volcano began.

Noe was boss.  She was the CEO of that hill.  She cruised in a minute ahead of Ellis, barely breathing hard.  As Eliis tagged off to me, I turned to find Mehana with an intent to reclaim the dignity of my vanquished teammate. She was way, way  up the hill. At least I think that was her. Whoever it was, she was pretty far away.

And so I settled into the first climb of this long race, crestfallen that our unspoken dream of three old men running 31.1 miles, step for step with three accomplished runners in their primes, was not to be. In the end, team Off On A Run would finish just north of 20 minutes ahead of the Big Island Running Company.

It was for the best. Without another team to chase, Chico, Ellis, and I settled into a comfortable uphill pace for the next few legs. The weather was nearly perfect: blue skies and ideal temperatures. Somewhere in our middle legs we had the pleasant surprise of catching up to fellow Kona runner, Brooke Myers. Brooke was running the 50K solo, and midway through she looked strong. I was secretly hoping she would catch Off On A Run.

As Ellis was finishing up his fourth leg, Chico and I checked the race clock and saw that maybe-- just maybe-- if everything went perfectly-- we had an outside chance of wrapping up in under four hours.  I tagged off determined to log a few 7-minute miles.

14 minutes later I crested a massive hill, certain the relay point was just ahead.  There was only another massive hill. And after that one was a long flat span ending with a group of cars parked in the distance. Okay, at least I would save a little face and come charging in.

I turned on the jets and soon checked my pace. The GPS told me I was screaming along at a 9:20 mile. Something was definitely not going my way. When I finally tagged and sent Chico off,  Ellis proudly exclaimed," Man, you were really tearing up that hill!"

What hill?  I turned around and looked back . Sure enough, that "flat" looked pretty hilly. That's the funny thing about the Hilo to Volcano course;  After so much uphill running,  some of it starts to look pretty flat. By comparison.

Ellis and I jumped into the truck and headed to the next relay point. By now we were climbing so much that the clutch greeted us with a nasty burning smell each time we started her up.  We waited for Chico, Ellis anxious to check off his final leg.

And we waited. Chico shuffled  in at last, shoulders slumping. The flu he'd  been suffering had finally caught up to him. In all, he  put together a gutsy run, and Ellis and I were really proud of him.
Ellis made the turn into Volcano and soon tagged off to me for the anchor leg.  At 2.4 miles, this leg was longer than my previous ones,  but was a truly flat stretch.  After my last effort, I was eager to make up a little time, and I had something  left in the tank, thanks to all the M&Ms I had been eating in the truck. 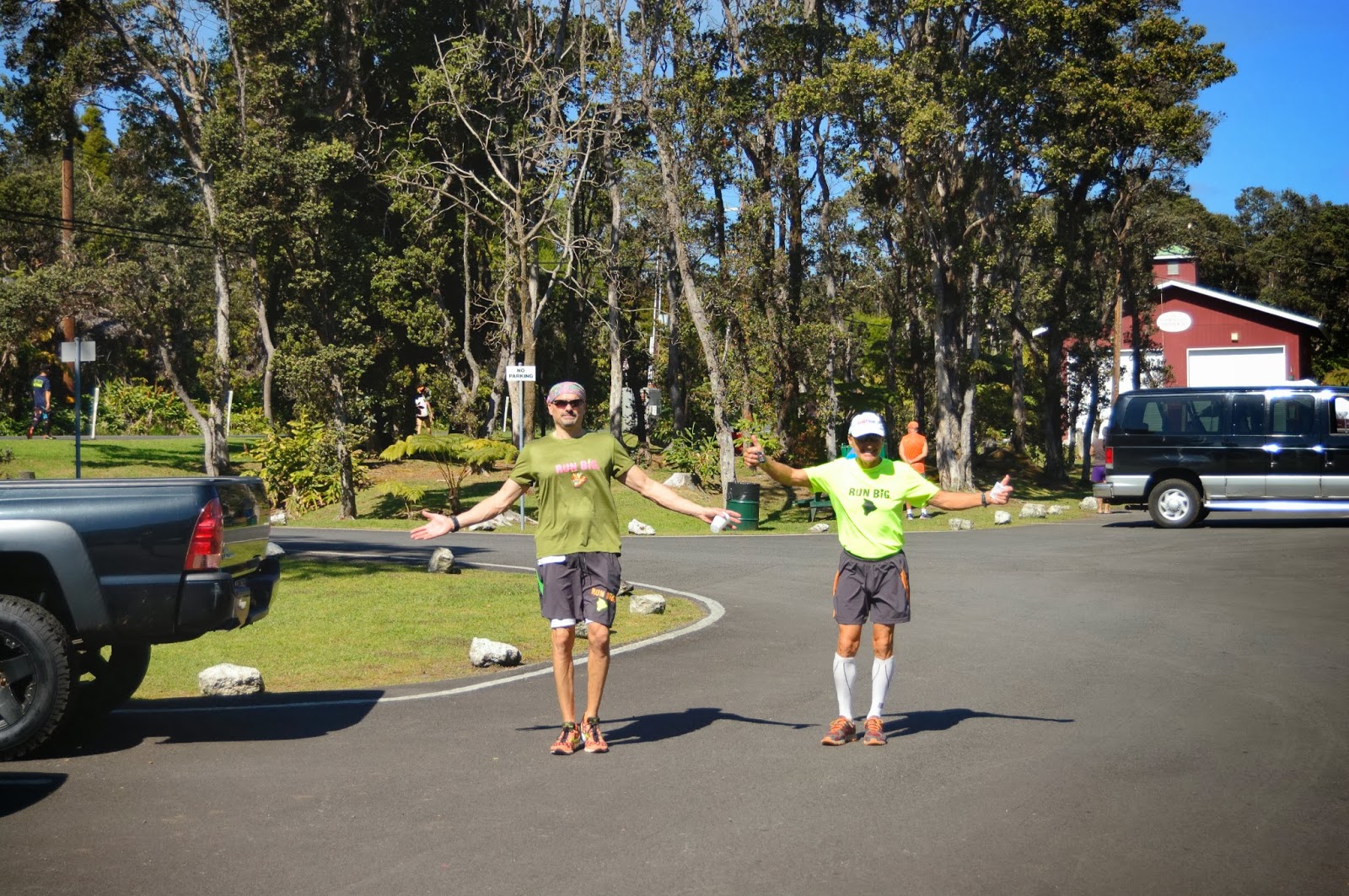 Ellis and Chico met me at the finish line, where we crossed in 4:19 flat, good enough for the win in the Men's Masters Division.  Carmen, Noe, and Mehana won the Women's Open Division. Nice job!  By the end of the race, we had become big fans of Off On A Run. Heather and Tai Scarbrough's team managed to beat Chris Gregory's by just a few minutes.  And Brooke Myers joined us  in bringing a little Big Island racing pride home to Kona. She finished in 5:44:42, good enough to be first in the Women's Open Division, and the second overall woman to finish the race.

The Big Island Road Runners put on quite an enjoyable race, with a highlight being the delicious, homemade soups served to the finishers.  Thanks to BIRR and congratulations to everyone who ran the race. 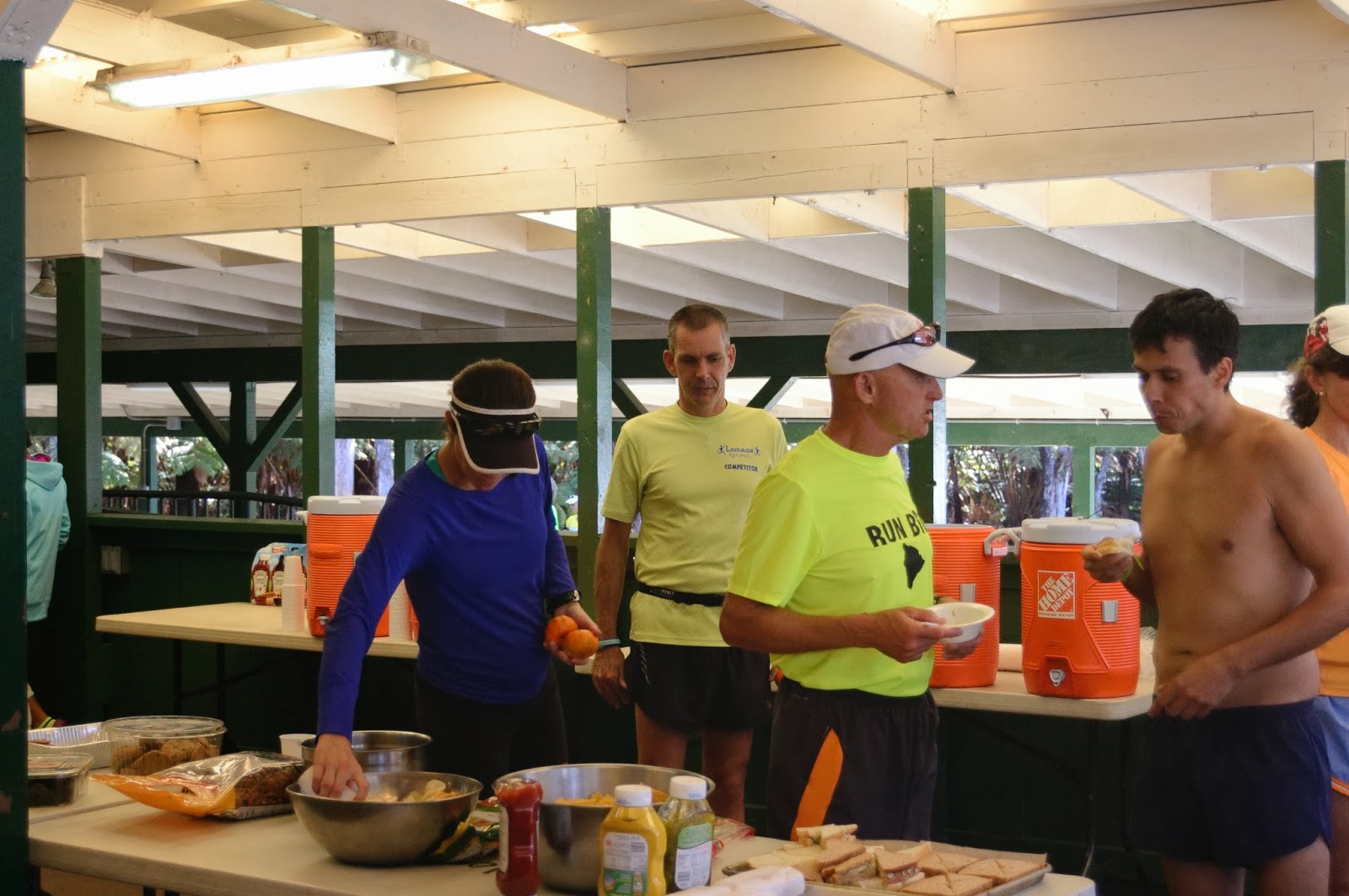