Happy Memorial Day and special thanks to all those who have served our country! Yesterday was a special celebration and showcase for the men and women who provide Emergency Medical Services back here on the Big Island with the annual EMS Run/Walk in Hilo. The run distance was a 5K and the walk was 2 miles. The EMS Run has become the biggest 5K on the Big Island, so we closed down the store and headed over to Hilo to check it out.

We started over to Hilo bright and early (actually it wasn't quite "bright" yet) with Ray and Michelle Whitford of the Big Island Honda Crew. We arrived in Hilo with plenty of time to warm-up. The run started and finished in Lilioukalani Gardens, where several activities and vendors were set up for the day. There were helicopter tours: 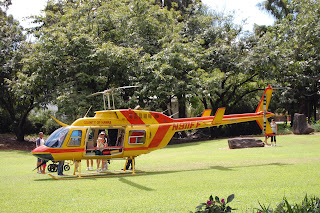 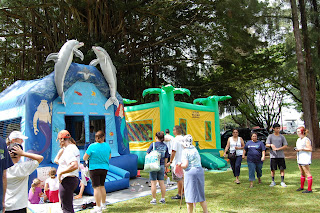 and a rock climbing wall: 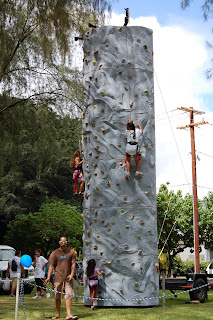 Since all of us were running, we unfortunately don't have any pictures of the actual race. The course was great, though. It started with a loop around the gardens before heading out along the Bayfront towards downtown. After the turn-around, it was straight back into the gardens. A flat, fast course. Many people sensed that, as the field was out pretty fast. Billy Barnett led the race out at a fast clip and never let up. He ended up winning the race with a time of 16:35. Jason followed in second with a time of 17:27, with Tyde Kaneshiro coming in third at 17:46.

In the women's race, Farrah Madanay cruised to a fast winning time of 19:55, with the next group of women coming in right around 22 minutes. Lory Hunter was second with a time of 21:42 and Shalila De Bourmont was third at 22:00. Full results from the race are on Wayne "Big Dog" Joseph's blog here.

For the rest of the Kona group, Ray finished in a time of 21:33, I came in at 22:41 and Michelle was at 25:38 (after being sidelined for the past several weeks with some injuries). Another Kona resident, Lisa Bryant, finished 1st in her age group in a time of 24:51. Jon Kunitake came in second in his age group with a time of 22:33. Some of the award pictures are below. 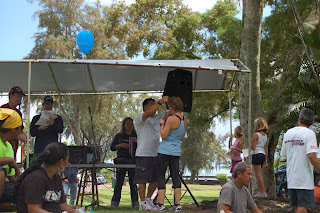 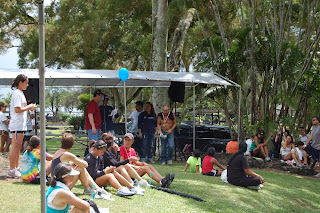 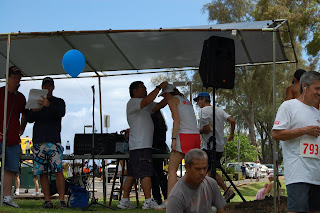 I finished second in my age group. 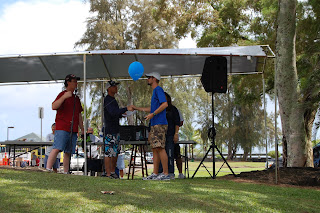 The family fun atmosphere after the event was fantastic. There was a special keiki race around the helicopters, which I'm sure many kids followed up with a bounce in the bouncy houses or a climb up the rock-climbing wall. For the adults, there were great post-race refreshments from the Boys and Girls Club and booths from HMSA and the Kona Marathon Family Runs. Reminder - register now for any of the Kona Marathon distances (marathon, half marathon, 10K and 5K) on June 27!!!

One of the other great features of the race was the amazing number of door prizes that they gave out! At the finish, they had two sides of a huge bulletin board filled with prizes and the names of the winners. There had to be at least 150 prizes given away. I walked away with a $20 gift card to Kozmic Cones, which we promptly used that afternoon. It was delicious and completely hit the spot. Although we waited to the bitter end, no other prizes were won by our group. But it was a great way to spend a day off and get a chance to see some of the Hilo folks! 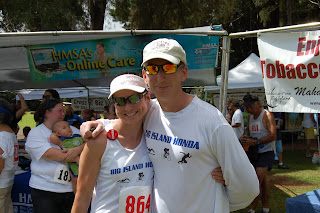 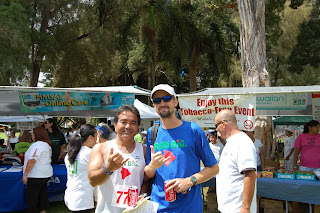 Jason and Harvey in "Run Big" post-race.
Posted by Melissa B at 5:29 PM