Today marked the official kick-off of the Ironman week of activities with the 26th Annual PATH 5k/10k.  This run starts at Hale Halawai and goes south on Alii Drive.  This race is truly an international affair.  Participants come from Canada, Germany, France, Spain, Austria, and all across the U.S. Some of the participants are competing in Ironman next weekend and others are here supporting family and friends who are racing, but want to get their own race in. And of course, plenty of the local runners, too. Since I had a long run yesterday and Jason raced on Friday,we were just volunteers/spectators/photographers at this one. 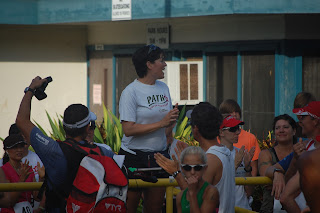 Laura Dierenfield from PATH gave announcements and started the runners out on the course. For those who don't know, PATH is the local bike and pedestrian safety and advocacy group on the Big Island and this race is one of their biggest fundraisers each year.  In addition to the race, there was also a silent auction with prizes donated by local businesses.  The silent auction was organized by More Than Sport, Chris Lieto's charity that is raising money to help local kids.  Proceeds from the silent auction will be divided among PATH, Kona Community Hospital, and the YMCA.

Both the 5k and 10k had some really fast times.  In the 5k, the winning time was 16:28, run by Jonathan Roth from Cochrane, Canada.  Second place was Nikolai Frederickson from Kastrup, Denmark in 16:53 and third place was Alexander Lang from Freisburg, Germany in 17:48.  On the ladies' side, three women came in right in a row, led by 11 year old Anna Foreman of Chandler, Arizona in 20:31.  The second place woman was Chrystel Chrystenson from North Salt Lake, Utah in 20:37.  Third place went to Linnea Humphrey of Toronto, Canada with a time of 20:57. Full results from the 5k are here.

Here are some photos of the 5k finishers:


It was about this time that I had to get to work organizing the awards, so I wasn't able to take many more pictures of the 10k. In the 10k, Chris Legh from Lyons, Colorado took first place in a time of 33:16.  He was followed by Alejandro Santamaria from Madrid, Spain with a time of 34:26.  Third place was Ulrich Fluhme from New York, NY in a time of 34:39.

For the ladies, a speedy Julia Grant from Ashburton, New Zealand was first in with a time of 39:09.  Second place went to Natalie Gaskin of Wellington, New Zealand at 41:04.  Third place was Jessica Fleming in 41:42.  Full results of the 10k are here.

I was able to break away before the keiki race and get some pictures of the kids lining up and some of the finish. 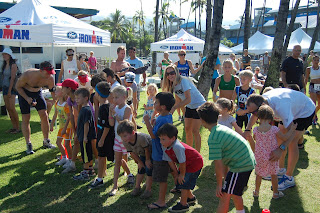 The keiki run started on the makai (ocean) side of Hale Halawai and then ran all the way around Hale Halawai, finishing at the finishers chute.  All kids were given bright red shoelaces at the finish. 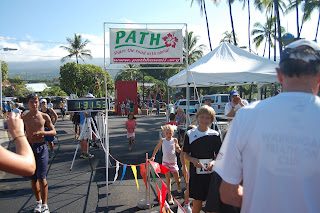 Congratulations to all the participants and mahalo to all of the volunteers.  Enjoy the festivities in town this week and stay safe on the roads!
Posted by Melissa B at 4:40 PM