So many people have posted pictures and recaps of Ironman week here in Kona, that there's probably not much more I can add. Plus that week was such a blur of activity and was now over a week ago, that I can hardly remember most of it.  But congratulations to all of the athletes who competed and huge mahalo to all of the volunteers, especially those that helped us at our brand new aid stations this year!

For the first time ever in an Ironman event, the professional athletes were offered Pro Fluid Aid Stations.  Starting at 4 a.m. on race morning, pro athletes could drop up off to 5 bottles (one for each of five stations) for their use on the run course. At each of these stations, their bottles were placed on tables so they could grab their specific bottles when they came through.  Here's a shot of one of the aid stations: 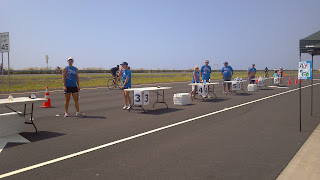 Jason was actually the coordinator for these aid stations, so we were a little nervous as to how they would work out.  However, everything went really smoothly, mainly because of our awesome volunteers.  Special thanks to Dave and Shirley Pratt and Kevin Prater who were captains of 4 of the 5 locations.  Each location then had an additional 10 or so people who helped make this a great success.  It was great to be able to see the race unfold through the run and also know that we were helping out those pro athletes who were racing as part of their job and as a way to make a living. We're hopeful that we'll get the chance to do this again next year.

Here's some other quick pictures that I took throughout the week and on race day: