There's no rest for the weary - at least if you're Jason. After his second-place finish in the Hilo Marathon last weekend, he only had one week to recover before he ran the run leg of a relay team for the Lavaman Triathlon. 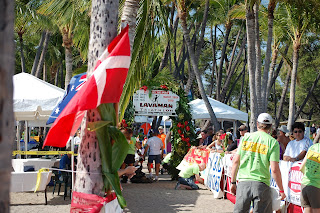 The Lavaman Triathlon is held in March every year in Waikoloa and is the start of triathlon season here on the Big Island. Over 1000 participants tackle a 1.5K (.9 mile) swim in Anaeho'omalu Bay, 40K (24.8 mile) bike ride on the Queen Kaahumanu Highway, and finally a 10K (6.2 mile) run over lava fields and around the Waikoloa resort grounds. The field included several pro triathletes, including 2009 Lavaman Winners Chris McCormack and Kona's own Bree Wee, but it was also made up of many Team in Training groups and a large contingent from Alaska.

Jason's relay team, Chain Reaction, was composed of some of those Alaska athletes. David Valdes, a former Kona resident now living in Alaska, convinced Jamie Stull (owner of the Alaska bike shop Chain Reaction) to travel down to Kona for the race. David did the swim, Jamie the bike and Jason the run. They were up against some stiff competition in the Bike Works team composed of high school superstar swimmer Nick Garrett, Bike Works owner Grant Miller, and local runner and coach Eric Neilsen. 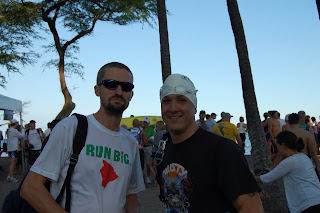 Jason and David before the race
One of the relay teams also included tennis superstar Martina Navratilova. She completed the bike portion for Team Navratrilavas. Before the race, I got a quick picture of her from afar. See if you can pick her out - she's in the black shirt and white cap right in the middle of the photo. 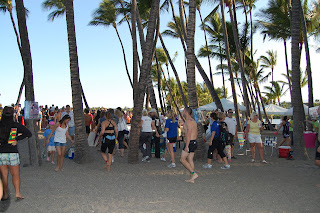 Ok, so it's not my best photo ever, but it really is her. Unfortunately, that was all I saw of her all day. 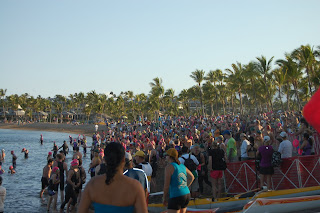 Swimmers get ready for the start. 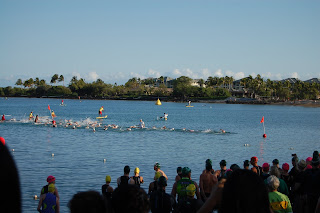 First out of the water was pro John Flanagan with a swim time of 17:16 (incredible!). 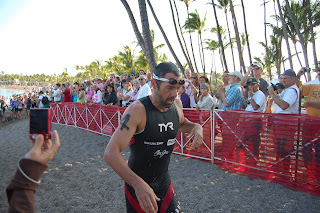 Jason had heard a little bit about his relay teammates before the race, but had never seen either of them in action. So we really had no good idea of when I'd see David leave the water. I was taken a little by surprise when the next group of swimmers out of the water were Nick Garrett, followed closely by Chris McCormack, with David right on his heels! Luckily I recovered quickly and snapped a couple of action shots. That group came out of the water right around 18 minutes - also blazing fast! 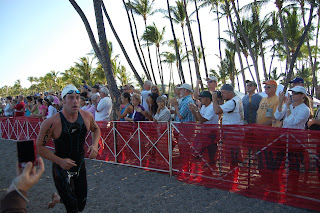 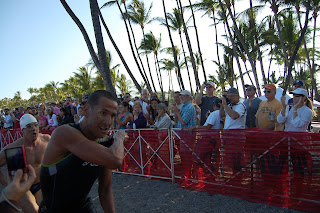 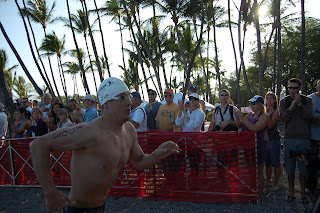 I stuck around the swim transition a little longer and got some pictures of more local athletes before heading over to the bike area to check on Team Chain Reaction. 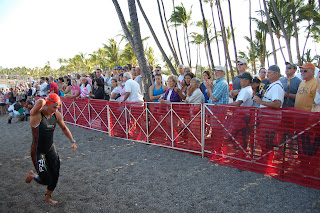 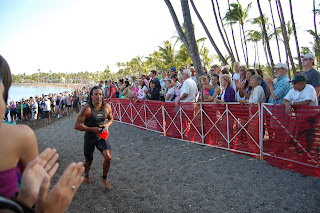 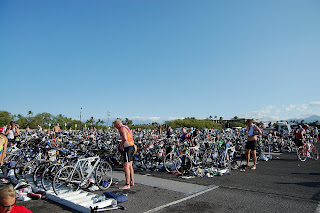 Jason was getting warmed up so he'd be ready to go whenever Jamie showed up. Meanwhile, I chatted with Ray Whitford of the Big Island Honda Crew (Mark Curry - swim, Keola Wimbish - bike, and Ray - run) and watched tons of people make their way in from the swim and out on to the bike course. After a little while, they announced that Chris McCormack was in the lead and making his way back to the transition area. If you look closely at the picture below, you can pick out the lead motorcycle and Chris behind it. 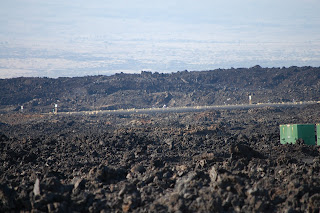 A couple more pros started coming in, followed by Luis De La Torre, with Jamie right on his heels. Another fantastic leg for Chain Reaction, with a bike time of 1:02. 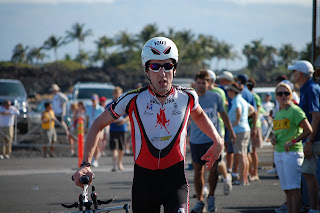 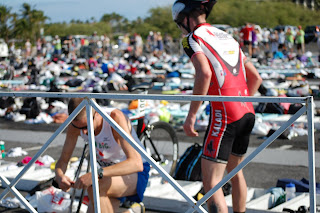 Swapping chips for the relay
After Jason got the chip from Jamie, he was off on the run. I waited a little bit longer to check on the progress of the Bike Works relay, which came into the transition about 4 minutes after Chain Reaction. Once I saw that, I headed to the finish line to catch the pro finish. 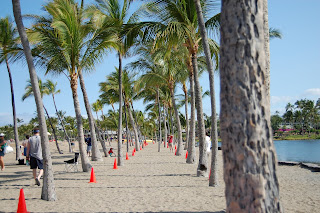 As you can see, the run ended with a beautiful, but brutal, stretch along the beach. Although from what I hear, the rest of the run over lava isn't much easier. Chris McCormack managed to hold on to his lead and was the 2010 Lavaman champion. He was followed thirty seconds later by Tyler Butterfield. Here are some photos of the top finishers: 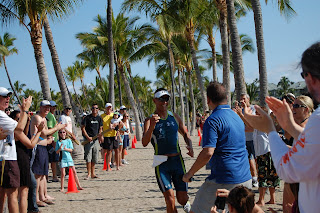 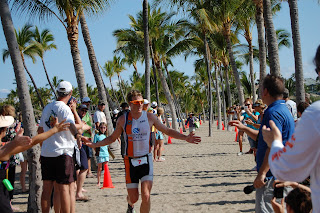 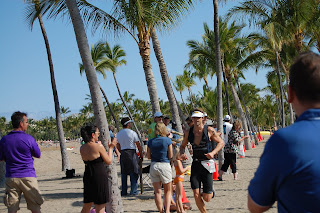 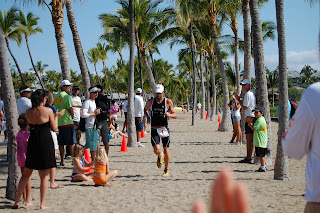 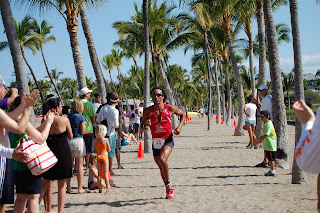 Luis De La Torre
Pretty soon, I started expecting Jason. He was planning around 36 minutes for his run. When it got to 37 minutes, I started wondering where he was. About that time, he finally appeared and finished his run with a time of 38:18. 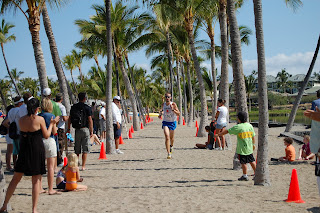 I left my post at the finish line to find Jason and hear what happend. Once I found him, the first thing I heard was "I ran off the course." Apparently, he came to an unmarked fork in the lava and made a wrong turn. After he ran down that path for about a minute it ended, so he ran back and took the other turn, costing him a couple of minutes. Luckily it didn't cost the team, since Jamie had built up such a great lead on the bike. Congrats to Chain Reaction!

Congrats to all of the participants and thanks to all of the volunteers! It was a first-class event and another great way to spend a Sunday. Here are some more finish pictures of some of our customers and friends. (Sorry if we missed you, I had to scoot to get back and open up the store!) 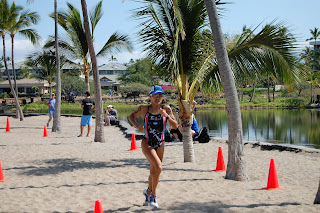 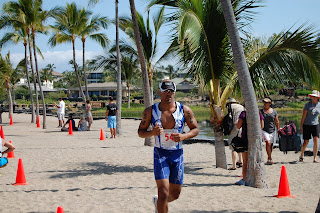 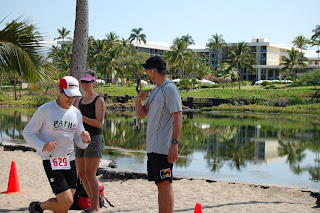 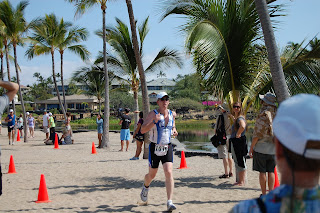 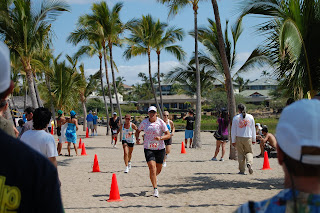 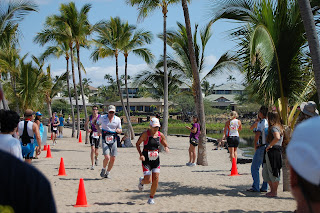 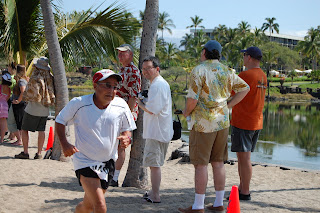 Jon Kunitake
Posted by Melissa B at 4:04 PM